I loved going to museums, but over the last couple ofÂ  years the simple joy of it got entangled with doubt, guilt, and sadness. With every visit now it gets worse (and more interesting). In the “mummy room” at the MFA I felt a misgiving akin to my horror of zoos. I practically fled from the Peabody Archaeological Museum, where I used to spend contented hours grazing the treasures of human culture, for the sheer shame of it. The sight of the slag heap at the Harvard Semitic Museum reduced me to tears. At a contemporary “traveling” exhibit of Australian aboriginal art at the Harvard Arts Museum I read a curator’s explanation and got so upset I had to sit down for a long time.

On that bench in the full presence of an amazing work of art, the sadness, horror, shame, and anger ran like quicksand. I have not had the energy or clarity to untangle it all. I’m not, it turns out, after all, one of those admirable thinkers – Timothy Morton comes to mind – who can passionately set their analytical skills to the task. I’m in too deep. But I have some insights. They might interest someone.

Let’s start with place (always a safe place to start). All art works, artifacts and bodies in art and archeological museums have or used to have a home (a place there they belong and can do the work they are meant to do). For some that home is, for the moment, not safe or welcoming, and so one could say the museum is “hosting” them, intending to return them when it is safe again. Under the Native American Graves Protection and Repatriation Act (NAGPRA) for instance, museums need to repatriate Native American artifacts and human remains when a tribe proves their ownership and claims the work. But that is the exception.

The place, time, culture of most works in museums has passed. Take a portrait by Rembrandt of a wealthy burgher: the seventeenth century parlor that it was painted for, that is even depicted in the background, no longer exists. The neolithic vessel: the culture that utilized it is remembered by no living person. Or a first-century Roman frieze: that temple has long been replaced by an office building, that god by other gods, or none. Homeless works of art, then, and the museum not a host but… an orphanage?

You might say, well, they might now and here be out of place, but in these cabinets of wealthy collectors, art galleries, and museums, they still do very well. Anything is better, anyhow, than oblivion. To which I would say, that may be so, but only under certain conditions – and how could it be otherwise?

I sit in front of these now, having paid my ticket, and I am grateful for the privilege of a glimpse of those past, dead, destroyed cultures. As someone who firmly believes that the past (whether it is remembered or not) very much informs the present, I also believe that it is helpful to know one’s past if one is to understand what the hell is going on. 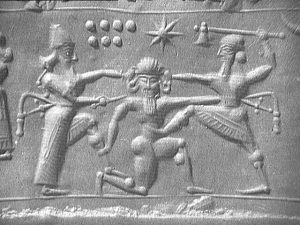 Gilgamesh, you see here on this seal,

with the help of his domesticated wild brother Enkidu,

cuts down Humbaba, the spirit of the great forests,

andÂ  when the gods protest, he will cut down the Bull of Heaven as well.

Because if you have an axe, you have to use it, right?

That old image and all the millennia that surround it, what a feast for the eyes and the mind! And in the glass case, the real thing, not a reproduction. It comes from that time, when it meant what it was meant to mean: the proud seal and story of the civilizing power of the man, Gilgamesh, through the domestication of spirits, wild animals, trees, gods and metals. As one who believes that the past informs the present, the original work of art and the absolutely perfect, indistinguishable (and therefore machine-made) copy of it are like the stone and the image of the stone: the one, with the gravitas of a long past of being worked on, in sweat and spittle, and carried through time, and sometimes lost and then found again, against huge odds; the other, a pastless image, three seconds deep. Oh, I appreciate the gift very much.

I can appreciate them on the condition of listening to them speak of what they are and where they come from, of all that being gone, stolen, forgotten, mislaid by carelessness, erased on purpose. This too they give. They are a good thing that is also terribly wrong, a corpse, stolen goods, a crime scene, a gravity well of loss and grief. There is much listening to be done, even more so as our own forgetting time draws near.

It’s a hard thing to do, that listening, but that’s not nearly the end of it. Part of the sadness and mayhem is that these dead are not also heard by the curators, funders, patrons and visitors on their rainy Sunday outing. When you hear it you want them to hear it as well. But it takes guts to weep in public places!

Ah, public spaces… Susan Sontag touches on this in Regarding the Pain of Others (2003):

Space reserved for being serious [“standing back and thinking,” and bowing and weeping]Â  is hard to come by in a modern society, whose chief model of a public space is the mega-store (which may also be an airport or museum). (p.119)

So there is another condition, another task here.

Perhaps that is what we are looking for on social media, Facebook, and in blogs. But those “places” not being places, and those “people” not being people, and those “friends” not being our friends, and thoseÂ faces not being faces, those are not the public, common space at all. When you weep at the museum, you undeniably are somewhere, being seen and seeing those who see you. And they will see you, in fact, they will stare.

I cry in museums. I bow down deeply before works of art in an offering of humility,

You may stare, but

I think as time winds down, you will see more people doing it.

Imagine a picture of you and your family on the wall,

you’re a beggar with your hand out –

They don’t even say, goodbye, goodbye.

If you think that we have lost the skill and habit of making public our thoughts and feelings in a mannerful, effective, healthy was speak only for yourself, or better yet, give it a try. The expressing of it is actually easy in that it just happens, pretty raw and naked, yet controlled too. You may want to shriek, but you’re in company here, of those who are calling you, and of others who are not hearing it yet. All this has a gentling effect on your expression, and on your mood too. That’s what used to be called “a civilizing effect” – now much maligned. Better to say: you’re paying your respects.

So, not so impossible after all. The difficulty still lies in the reactions of those who witness. You, who weep, know immediately that in one sense you have joined the vanished in the paintings, the mutilated victims in the war photographs, the eyeless mummies in their wooden boxes: your goodbye, goodbye is not understood. But unlike theirs, your grief is heard loud and clear. Where they were but images, objects for consumption, they now sound out through you. You’re drawing them all in, the long dead with their beauties and histories and grievances and joys, and all the living who are staring and hearing it, changing that silent museum/megastore into a common, public space.

So, a call for nevertheless, notwithstanding, going to the sorrowful museums and taking them to task by listening and weeping. And a call for approaching those who cry there and asking them: why do you cry? What is here that makes you cry? And why can’t I hear it? Yet.