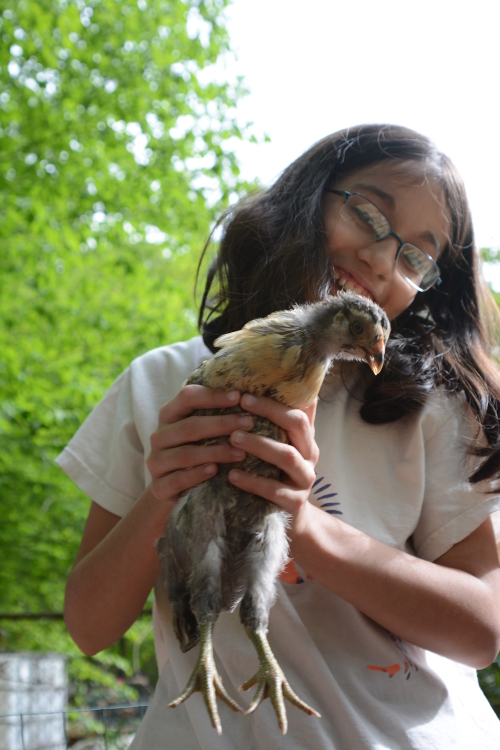 The six chicks are now 6 weeks old and last week I put them outside in the Little Coop. The dust from their food was driving me up the walls while they were inside the house! It hasn’t really warmed up yet, so I had the heat lamp on in there at night. But yesterday it was 50, so I didn’t turn it on: their first night in the dark. The little ones seem to bear it well. They are fully feathered out, growing fast, eating lots, and the Easter Eggers are growing their whiskers. But they still pip-squeak like little chicks.

They still don’t have the hang of going inside the coop when it gets dark. When I turned on the red heat lamp after dark, they’d all skedaddle in, but now I need to coax them in with a flashlight. I thought it might be the lack of a roost, so I made them one out of Amie’s IKEA toddler table (the one in this picture, where has the time gone?).

You were wondering why I kept it for nine years?

But nope. I still need to haul them in. They’ll get the hang of it, I hope, because the raccoons come a-prowling not long after the automatic coop door opener on the Big Coop closes. Any stragglers are shut out and had better hope the humans get there to correct the situation first!

Amie loves playing with the little ones. I created a quick fence around the back of the Little Coop so that when we open the back door and they run out, they’re contained. For one, they’re fast and small, hard to catch. Second, if they get out they’re at the mercy of the big hens, who have somewhat gotten used to their presence in their yard, but who might still give a mean peck to any that come within range.

The picture to the right is of the runt, Pebble. She is holding her own, she’s just smaller. Compared to her, Jiggle, also an Easter Egger and the biggest one of the lot, is a giant.Â  It makes sense they hang out together. 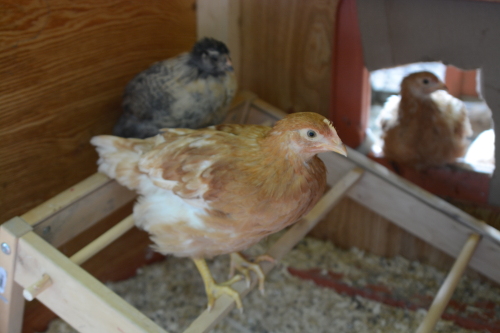 And then there is other fowl. 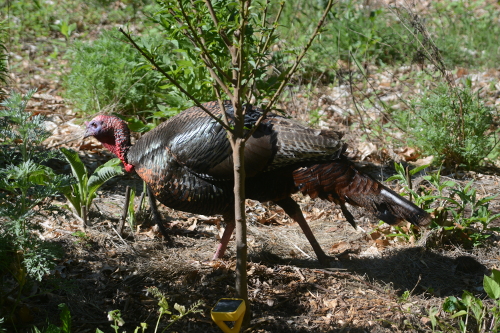 We’re not used to seeing wild turkeys in our neighborhood, but one day two came strolling through our front yard on their way to the aquaduct (which runs behind our house). We’ve seen them a couple more times. They bypass the veg garden (thank goodness / so far) and go via the bee hives.Â  The female goes first, the tom follows ten feet behind. He tries to get her attention by displaying and calling when she doesn’t deign to look back (which is mostly). He is quite handsome but it looks like something took a bite out of his tail feathers. We’re careful around him – I’ve seen wild turkeys go after people and it isn’t pretty. 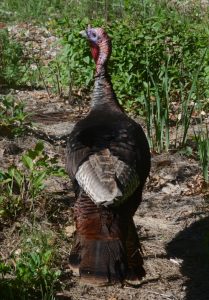 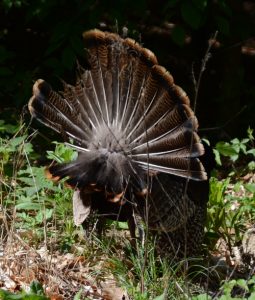 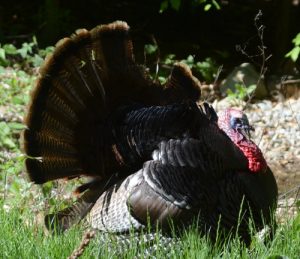