Joining the flocks after letting them spend their days in the large chicken yard together has been less dramatic than we feared. Still, in the mornings they start hollering to be relieved of each other’s close company around 6 am. I get up, pull on a sweater (that time of year), slippers and head out, a bleary-eyed zombie, and open the door for them, then go back to bed and to sleep. Not fun.

So I did some research on chicken coop door (“pop hole”) openers. I looked at many systems and products and in the end went for one of the more expensive but (I hope) less troublesome systems: the VSB motor that runs on batteries and by a light sensor made in Germany by AXT Electronic. I might get the timer, but we’ll see how the sensor works first.

I bought the motor, the rails and the door in one package from a US supplier, then got the outdoor sensor from AXT Electronic directly. It’s all pretty light and small: 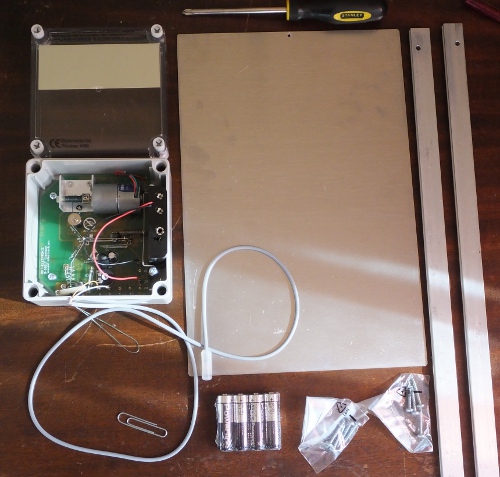 My install was going to be pretty straightforward. There is a lot of space in the coop, and no studs, etc. At first I thought I’d cover the pop hole that was already there, but it was too wide and, anyway, I thought it would be good to keep that one free (though closed), in case the electronic door stops working and the hens need to get in or out quickly. Also, since that new roost is pretty well stuck, it would have been hard for me to reach that area. Lastly, I figured that by moving the pophole and ramp to the other side, it’ll make access to the coop easier for humans. 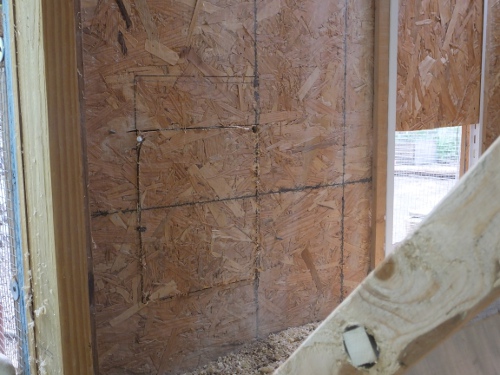 So I decided to cut a new hole. It took some effort as I had to cut through the box and the siding. 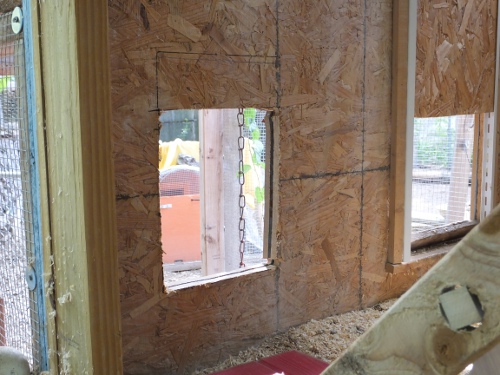 Not straight, but it’ll do.


Then with the help of a bubble level, a pencil and my in spite of my perfectionist ambition to get it all level and straight, etc., I managed to install the rails. 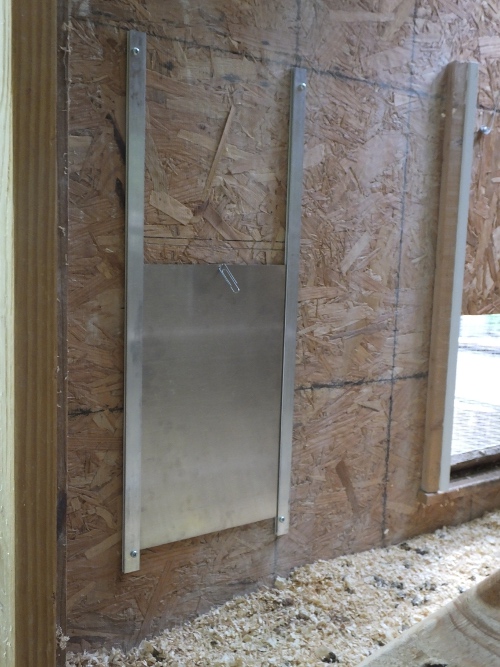 The instructions aren’t very clear, so here are some tips:
1) The “stops” mentioned in the instruction are the two screws you put into the bottom of the rails. When the door hits those, the motor will stop unwinding the cord. So make sure you install those bottom holes on the inside.
2) Make sure the stops are an inch or so below the pop hole you cut. That way, when the door is closed, an enterprising long- and nimble- fingered raccoon can’t get its digits underneath the very light door and pry it open.
3) Don’t install the rails extra tightly against the door: you want it to slide easily, but also don’t give too much leeway. 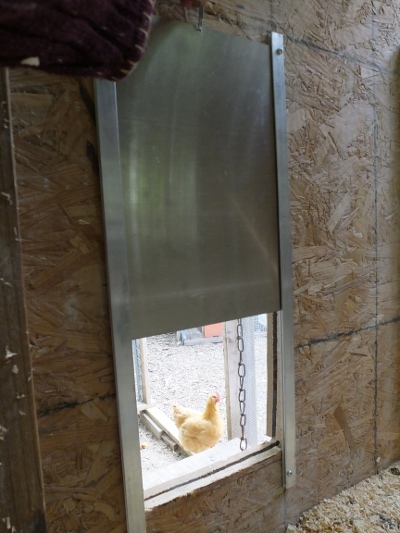 So far so good. Then I installed the VSB box. First I opened the door to where I want it, then marked the highest point of the paper clip. I held the VSB so that that point overlapped with the bottom of the loop in the pull cord. It’s at that point that the VSB will stop retracting the cord (there is a tiny bead on the cord that pushes up the white lever, making the engine stop). Screwing it in requires a long drill bit. 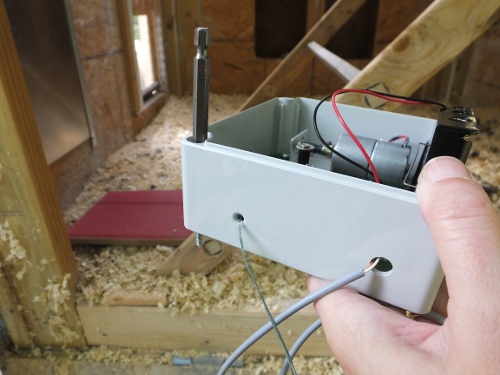 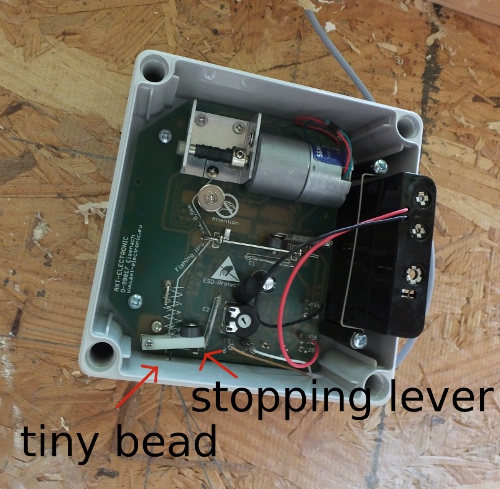 The distance between the bottom of the door when closed and the VSB can’t be more than 60 cm, which is about 23 inches. I was good. 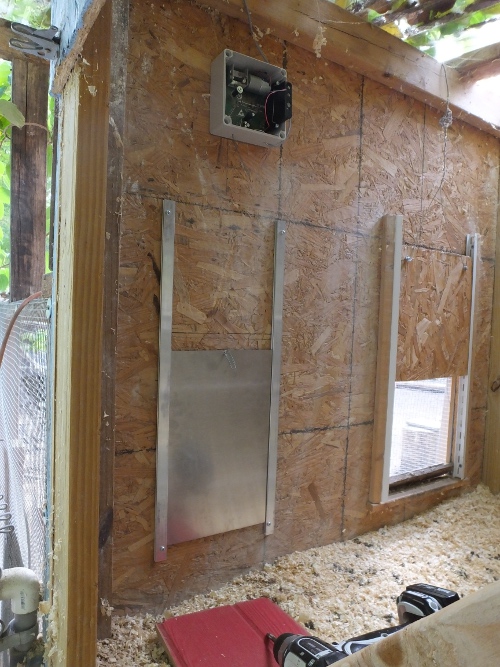 When I threaded the loop through the paperclip and let the door hang on it, it turned out the cord has some give, so I put in a knot to make the loop less long, giving the hens an extra inch. 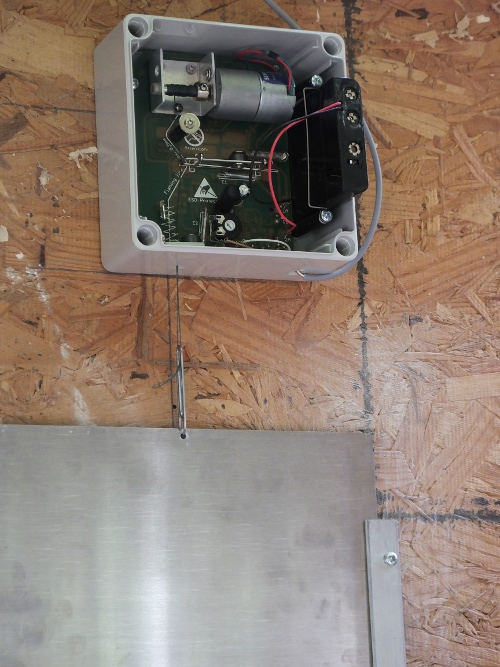 The sensor is threaded through a small hole in the bottom of the box and attached to the 5 and 6 pins. I put in the batteries, covered the sensor, and it worked! Here’s a 40 sec video:


I closed the box and guided the sensor cable along the open eaves of the coop. I taped it down on the inside and the outside (my hens like to climb up there) so they don’t get the idea to peck at it. 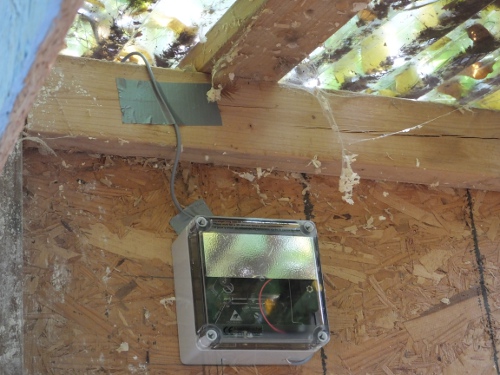 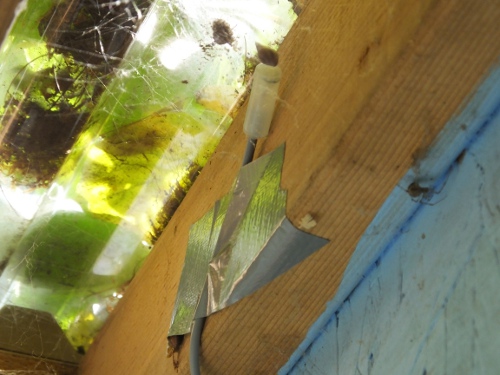 Then I closed the other hatch and moved the ramp over. 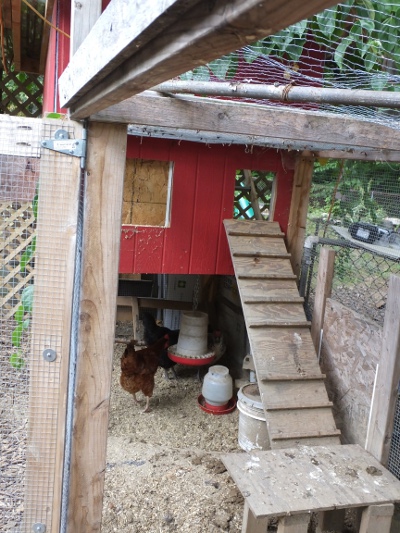 The real test will happen this evening and tomorrow morning: then I’ll see if the door closes not too early, not too late. If it does, I’ll need to adjust the sensor’s light sensitivity.

Beyond making my life easier, this kind of technology makes it possible for schools and businesses to have chickens without burdening custodians and volunteers. Wouldn’t it be neat for your neighborhood school to have chickens?

{UPDATE} It works perfectly: all chickens made it in at night, and this morning I was not woken up by their squabbling!