And just as I wrote how “my” creatures were doing so well, our little runt, Pebble, who had held her own and was doing so well, got a wing torn off, through the wire fence of the chicks’ extra run, in broad daylight. We isolated her, and I looked at the wound as best I could on my own. She seemed alright, roosting, eating, drinking. But then chickens never want to show they’re hurt or in pain; the flock weeds out the weak links instantly and viciouslyÂ  (we’ve seen it). Still, foolishly we thought, “let’s give her a chance.” After a while I was able to look at the wound, with DH helping, and she was smelling bad already. I sharpened my cleaver, speaking gentle words took her to the back of the garden, laid her down on a tree stump, and without thinking about it took off her head. Amie and I buried her in the pet cemetery. RIP, Pebble.

The Little Coop they’re in has a coop (box) and a run made of welded wire, impenetrable by predators and their claws. It is getting too small for them, so I had made an extra run out of some garden wire staked into the ground, a garden wire ceiling. Not knowing what got Pebble (we thought a cat), I let them in their extra run and stuck around, reading a book (Alphonso Lingis, The Imperative, in case you’re wondering). After an hour or so I looked up to a commotion near the big chickens’ run: it was a racoon. At 3 in the afternoon! Aren’t they’re supposed to be nocturnal? Then I realizedÂ  he/she was inside the run, but how? I was sitting right in front of the only entrance. My exclamation of surprise sent it scurrying through the hole he/she had made, giving it away: a narrow gap between the fence top of the run and the coop. So that’s why I was blasting through chicken feed so fast: each evening before dusk we closed the run, but this raccoon had been partaking of the buffet, night and day. And yesterday I also took Pebble’s wing. 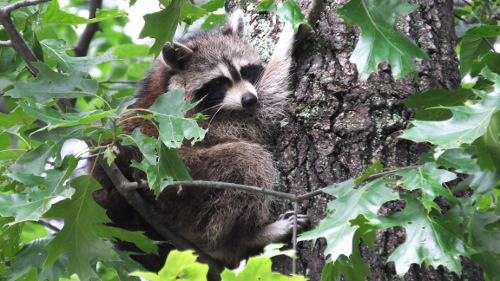 So we’re somewhat stuck. We’re letting the big chickens out, hoping they can fend for themselves, but we also closed the gap and now that racoon may be getting hungry enough to go after them. The little chicks are cooped up in their too-small run, except when I am in the chicken yard with them, reading books (not a bad thing). It’s not sustainable. Stay tuned.