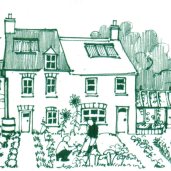 During the Transition Training we watched a lot of images and videos of Transition Initiatives, and at first I watched them with mixed feelings of joy and anxiousness. My heart sank because I inevitably thought: “I can’t make that happen.”

That sinking feeling stems from the fact that, though I arrived here over 11 years ago, studied, married, bought a house and had a child here, I still don’t feel at home. Why? Not because of the people around me: I have found each and every one of my colleagues, neighbors and friends – Americans or not – to be sincerely welcoming. So it must be me.

The place was Antwerp (Belgium), a city within half an hour’s drive of the city where my grandparents and aunts and uncles all lived. A place where my family can trace and place our ancestry as far back as the 1700s. And a place with a culture in which “migrating” is the exception. You see, Belgians don’t leave Belgium: the emigration rate is less than a percent. And Belgium is a small country, about the size of Maryland, so children “leave” (for college, or to live) to within at most a two hours’ drive away from their parents. In my family I was the third (out of four now) in the span of two generations to move abroad, which makes my family exceptionally migratory.

Let’s put this in context. The United Nations Commission on Population and Development concluded in 2006 that only 3% of the world population is an international migrant (with most migrants moving from developing to developed countries). The kind of mobility within the United States that makes for big moves, in contrast, is high: the Census of 2000 determined that, within 5 years, no less than 8.42% of its respondents had moved to another state and an additional 2.86% to a foreign country. That number has in all probability gone up in the last couple of years.

So let’s just say that my Amie is seeing a home very different from what I saw as a kid. We see family once or twice a year, not every weekend. Mama and Baba have strange accents – and so does she, insisting on “woh-T-er”. Mama and Baba can’t vote and they don’t know how to negotiate certain communal systems. So I am afraid that Amie will not know what “home” is, or that she will call “home” something that I would call but a weak version of my own rich childhood memory of home.

And so I must ask myself: can I, dare I, make this place my home? What if home means not just the core family of the three of us, not just lengthy visits (visits: that says it all) from grandparents and aunts and cousins, not just local traditions with good, good friends that we see often… but also the wider culture of a hometown?

The Training helped me realize that I should make this hometown happen, for myself, for Amie, and that it is possible. That this what a Transition Initiative could mean to me, my family, and the people in my community: not just becoming more resilient in the face of peak oil, climate change, and economic crisis, but first and foremost what our trainer called  “becoming indigenous toyour place”: coming home.

{Previously, about Transition: the giving of gifts}