So, we made it to NYC, from our place to our friends’ place, in just 3 hours. Also the return trip, the day after, took exactly 3 hours. We have the route, the best times to travel, and the gung-ho attitude down pat. It was unfortunate that we had to take the car, but all three of us had to show up in person – otherwise I’d have jumped on a bus. It was also unfortunate that we didn’t return with the desired visas. They might still be forthcoming, and hopefully on time. We’ll see.

But the good thing is we got to stay with our dear New Yorker friends, A and D and their daughter E. They even fed us a wonderful vegetarian Thanksgiving Dinner. Yum! There was an acorn squash involved, with honey… I’m growing that squash next season! Amie got to play with E, who is seven now, very bright and kind. They’ve known each other since Amie’s birth and are like sisters, giggling, playing and reading together. It is with this family that we want to start an intentional community (I’ve not written about that, have I? Later).

And we got to take home two things that they had been storing for us (in their tiny 500 sq.f. apartment, which is already crammed full with art works): 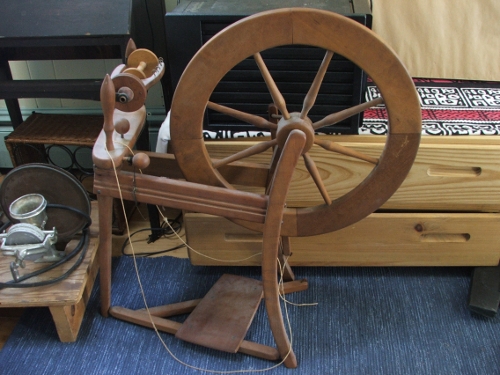 The spinning wheel was a surprise. A, the dad, had picked it up off the street, along with a big, heavy suitcase that was locked. He brought these unwieldy things home (on the bus). There he opened the suitcase and found diplomas, certificates, prizes and photographs, many of them pretty old. A stashed these away until late that evening. When D was asleep, he quietly exchanged all their own photographs with these old ones. D woke up to a house full of strangers! But she became upset when she heard the story, because this was obviously someone’s life – so meticulously collected – thrown in the street as trash.  I’ve offered to help them track down family members to see if they want these things back.

The spinning wheel has some broken and possibly missing parts. We’ll figure out how to fix and work it once we get back from India. 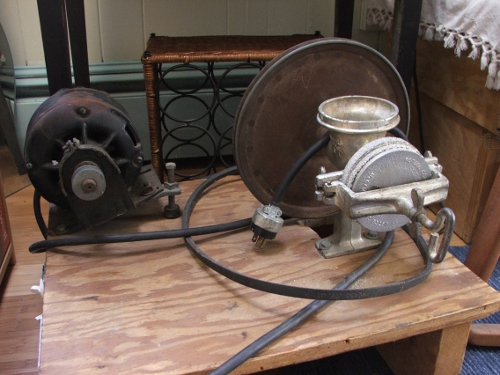 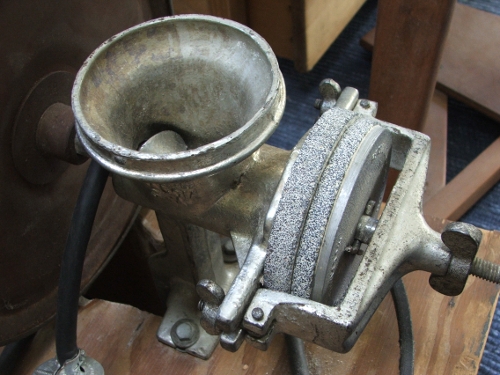 The grain mill was A’s in college. Apparently, sometime during his adventurous college career, A and a friend baked tens of loaves of bread every day, from scratch. His parents had this mill sitting in their basement in Michigan for over a decade, and so it made its way to NYC, then to us. I don’t know how it works yet. I has a heavy duty engine but I want to find a wheel for it, to make it manual.

Do scroll down to see my new pots.