We are in phase ii of introducing the little ones – three days shy of four months old, a month from laying? – Â to the big girls. Their little coop has been sitting right next to the big one for over a week now, so the girls know each other. Because their run has screen on the bottom, we let the little ones out to free range quite often so they can take a dust bath. One day we also let the big ones out – a first for them! It was fun having them clucking around my feet as I hung laundry and worked in that part of the garden, but whenever the big ones came across the little ones there was pecking. Not too much, I think Amie was more frightened than the chicks. Still, we’re not repeating the experiment until we have a way of keeping them contained in this part of the garden (mainly keeping them off the lawn, which is just to the left in the picture). 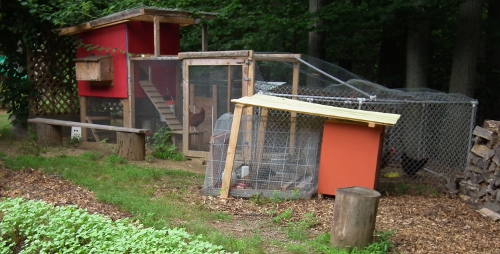 On the advice of a friend we sequestered the hens in the second run with a treat of cut-up squash, then moved the little ones into the first run. They were quite at a loss. I don’t think these two are very bright! Amie tried to get them to explore the coop, the roost, the nest boxes, but they might be afraid of heights or something? Anyway, it was fun. 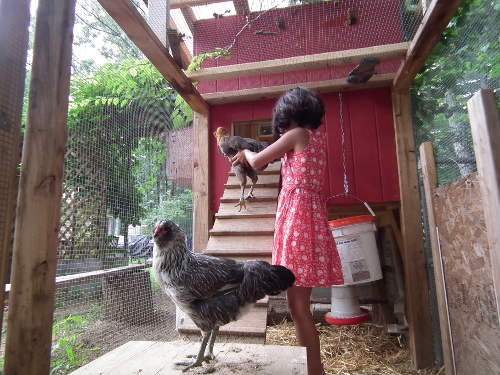 Above is Amie shoving Knocty into the coop. Oreo rules the landing. 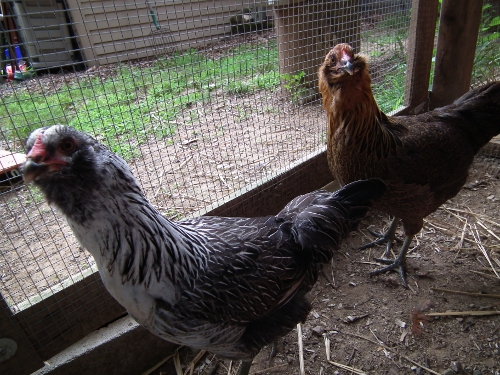 Funny chickens, with their whiskers. 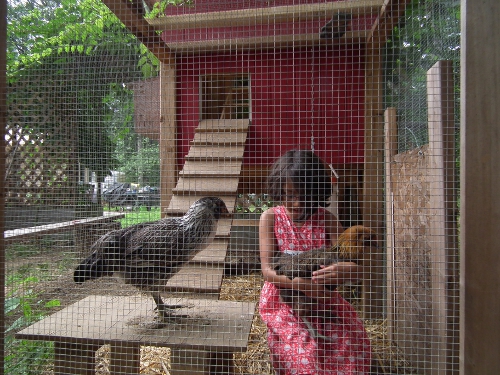 Amie loves to hold the gentle Nocty (there is some uncertainty about the spelling).

We left them in there for a couple of hours, during which I doubt they left their favorite spot, the “landing”. Then we restored all the chickens to their usual habitats. We’ll do this for a couple of days, then we’ll put the little ones in at night, as recommended by the books, for phase iii.

I also dug 12 lbs. of potatoes, which makes for a pretty good 1: 4.8 yield. Nice! Going by the plants, the other potato bed will yield more. 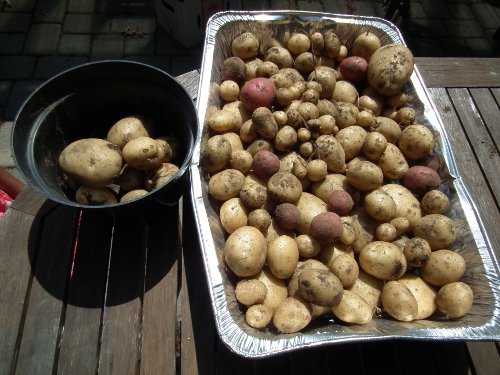