The two new chicks – Oreo and Nocty – are hale and healthy and growing like the weeds, a little over two months old now. They were cooped up in a large crate on the porch at night and in the “table coop” for most of the day. I liked neither, the latter not predator safe, the first taking up too much space on my porch and the smell too close to my kitchen. So over the last couple of days I built them a small coop, which we’ll also be able to use as a tractor and as a place to isolate a sick chicken. DH was traveling and then down with a bad cold, so I did this all by myself – though I had some help from friends for the initial frame. Most of the materials, except for the screen and the latches, were scrounged from what I had lying around. The paint was a $2 oopsy from Home Depot. 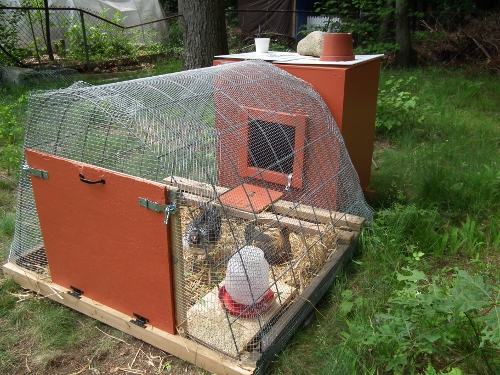 I debated about whether I would screen the bottom too, and decided to do so, to make it entirely predator and thus worry proof. A thick carpet of straw and a tray of sand and dust makes scratching and dust bathing possible again. 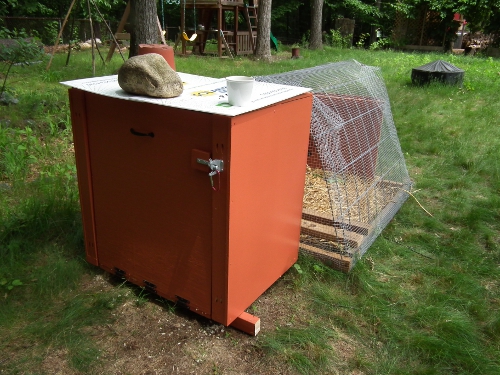 It comes apart in two pieces and is very movable that way, but I’m planning to somehow attach a frame with handlebars and the nifty wheels on Amie’s old stroller to make it into a real “tractor”. Â One last thingÂ it needs now Â is a permanent roof over the coop part and part of the run. For now a tarp does the job, to keep Andrea out ;)