The kombucha SCOBY started as a quarter coin (the mother) in a store-bought bottle. I put it in a pint jar with Indian Chai, where it grew a second layer (SCOBY baby) on top which soon occupied the entire surface. Then I moved it again to a large cookie jar, where a third layer (SCOBY grandchild) quickly formed on top.Â That’s three layers. Here they are, peeled apart. 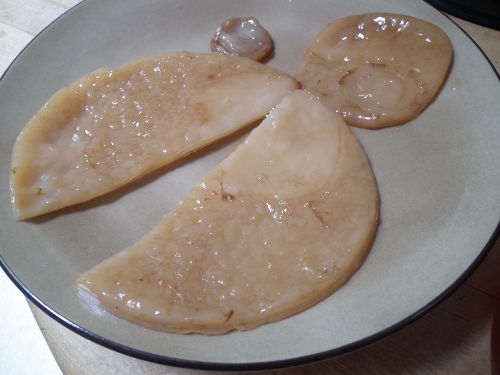 I brewed four teas: one Indian Chai, an old Assam, a new Assam, Â and one Irish Breakfast, each with 1/4 cup of cane sugar. Once they cooled down to room temperature we were ready to start brewing our first kombucha teas.

Handling the SCOBY, pulling it out of the jar and inspecting it for mold (none, it was very clean) was an interesting tactile experience. OrganicÂ is a good word.Â To know that it is a living, growing organism or rather, coalescing population of living organisms added to the awesomeness. Â I then peeled the layers apart. That too was neat: they formed distinct layers (“generations,” in essence) which came away easily.

I put the first baby (the second layer) back into the now very acidic brew that the SCOBY had been growing in (adding some tea and sugar) as a hedge in case the other mothers perish in their new jars. Then I put the original mother (oldest and smallest generation) into the Irish Breakfast. I cut the third, largest and newest layer, into three and put each piece into the Assams and the Indian Chai. Each SCOBY was accompanied by a cup of the original, acidic brew.

Like this, I see, if they all thrive, I’ll have lots of SCOBYs to give away!