Turns out Baba is just as much a softie as I am. When we went to bed after yesterday’s ordeal, I found Amie had finally fallen asleep in her own little bed. We lay there on our big bed for a minute or two, then I whispered: “I wish she were here with us…” He said, without hesitation: “You pick her up and I’ll get her pillow.” Soon we were all snuggled up together. Back to normal. 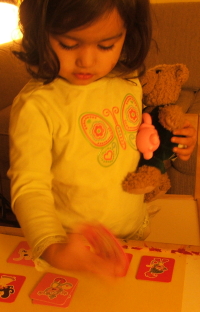 She calls it “Membery” or “Rememory”. It’s the first and so far only board game Amie has played!

Someone gave it to us. I am not fond of Dora – I don’t like the art (call me a snob), and while reading a story to another child I found careless gaps in the plot, while it was supposed to teach logic! So I hid it.

Unfortunately, Amie’ discovered an episode of Dora on the plane to Singapore, and during that ride she must have watched it 20 times (curiously, she didn’t want the headphones). Not since then: not on tv or in books – I’ve managed to keep Dora away.

Of course Amie found the game in my “squirelly cupboard”, where I keep books and games that are too old for her still. She wanted to know what it was.

I told her: it’s a memory game. With Dora.

I told her the rules of the game – so simple: “Find the match and you get to keep the cards!” Then I taught her to point to each card in a pair, naming them (“Dora, Dora! Monkey, monkey! Chicken, chicken!) and then to take one last hard look before they are turned around. I ask her: “Ready?” She looks with burning concentration, then says: “Yes!”

First we played with 6 cards – 3 pairs in 2 rows. Way too easy! Soon I added a pair: 8 cards – 4 pairs in 2 rows… Well, you know the rules are that the youngest begins each game and that she loses her turn only if she makes a mistake. Let’s just say that in the end, she had nearly all the cards (of which there are 72) in her box.

Then she got careless – we had been playing nonstop for over 30 minutes – and didn’t get the match. She gladly let me take my turn, but when I found the match and wanted another turn, oh no!

Funny how they dazzle you with their intellectual skills, their fabulous memory, intense concentration and grownup language at the age of two… but they fall apart when such little things don’t go their way. It truly reveals how there are so many sides to a child’s development, not just if she knows her letters or can draw between the lines. As for the matters of the will, or emotional development, or character: aren’t they matters of experience, of maturity?

Amie has been around for a little over two years, how could I expect her to be mature about it? I gave her a big hug, let her take over again, and we decided that, for the time being, Amie has all the turns in Memory.