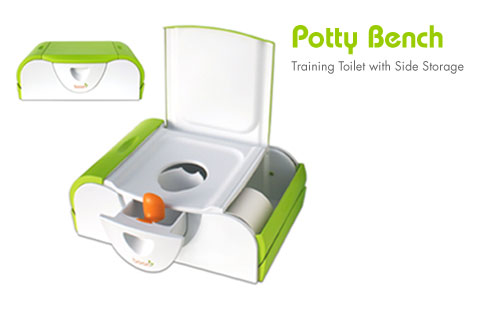 I think that potty-training was Amie’s first real challenge. It’s not like “learning” to walk and talk, is it? Those come naturally and very gradually – for both the kid and the parents. Going on the potty is the first fully learned skill, one that requires physical training, and patience and a resilience to failure for all concerned.

There seem to be two general schools of potty training. Each is a combination of two approaches to the child’s access to the new (the potty) and to the old (the diaper).

With regard to the potty:

You can combine this with two types of access to the diaper:

We started out by following a combination of schools 1 and A. We got this fancy Boon potty (*) when Amie was around 1 1/2 and it stood in our bathroom for months before she was really ready. She would sometimes sit on it, but for fun and play, which is exactly what school 1. encourages. More often she would sit on top of the lid and read books.

The time came. She seemed ready, announcing that she was peeing and even going to pee, complaining about a wet diaper, etc. Preschool was in the nearer future and family members were noticing the continued presence of diapers.

But Amie had lost all interest. We could not entice her to sit on that potty, not even as a game – while keeping our fingers crossed that we would strike lucky. Even when she was clearly ready, she refused. Not even our repeated observations about big girls going on the potty helped. She’d cleverly point out that she was “a little bit big and a little bit small.” Even the model of Boo – her favorite Boo, from Monsters, Inc – going on the potty wouldn’t make her try.

That potty just wasn’t fun anymore! The novelty and adventure of it had simply worn off.

Still sticking with school 1. we switched to approach B. We put her in underpants when she was at home. She didn’t like that at all! She often asked for a diaper, but I would talk her out of it. Still, it didn’t feel right because I could see she wasn’t sure of herself, and couldn’t relax. We would have 50% success, but she would go to the potty reluctantly and renew her requests for a diaper. Just as often she would relax and have an accident, and then she would cry, heartbroken. This was undermining her confidence: not good!

Exit schools 1. and B. We put the diapers back on and tried to break the curse of the boring potty by introducing an adaptor for the adult potty, but she didn’t feel comfortable on such a wobbly contraption, which required the added fuss of a stepstool.

I thought it best we take a break: we stopped our efforts and I hid the potty for over two months.

When I reintroduced it – a la school 2. – she finally got on track. We placed it in a different place: our common bedroom, put lots of books next to it, and made a big ado about her own roll of toilet paper. We mixed approaches A. and B., letting her decide. Sometimes she asked for panties, sometimes she preferred the safety-net of a diaper or pull-up – it doesn’t seem to matter, because she can open her diaper herself now (**). We had some accidents, but her reaction was now one of u-oh, not of help!-I-can’t-do-this! I introduced the reward of an “M&M” (an organic chocolate covered raisin).

It has taken about four months now, and – when at home – she is fully potty-trained during the day. More than often she wakes up with a dry diaper too. She is even going on the potty at daycare (contrary to many other kids, the peer-pressure of her friends going on the potty there didn’t help much). And she hardly ever asks for her reward anymore!

“I’m a big girl now!” she will say with conviction.

Next challenge: going on the potty in public restrooms and public spaces like parks, and holding it in when we’re in the car!

(*) We like it a lot. It’s rather expensive ($35) , but it is comfortable (as far as I know), has storage bins on either side, one with a rod to put the toilet paper roll, and it can be closed to lok totally inconspicuous as a sturdy step stool that will lift your toddler up to the sink. And it looks neat too.

(**) Seventh Generation has made the tabs on their largest diapers bigger: very handy, and they no longer tear off.