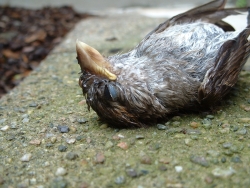 I’m always picking up books like those. I read Hope Edelman’s Motherless Daughters, for instance, when I was pregnant, and got many comments, mostly in the vein of “how can you read that now?”. But I am unashamed, because I’m a writer. It gives me the license to “imagine things” without having to be embarrassed about it. So, yes, I’ve imagined the worst for Amie: what if she died, what if I died, what if her father died? I’ve “lived” through these scenarios, and would like to, one day, write a novel about one of them and really explore such an event.

One of the first tasks of mourning, writes Trozzi, is understanding: understanding what death is. Not “going to sleep”, “passing away,” “going to heaven” or “being lost. Death is a physical process that ends everything that we call “human” that attaches to a person’s body. A child needs to understand that, and we need to stop using euphemisms. If a child doesn’t understand the most basic meaning of death, he or she will never be able to deal with loss, will never be able to mourn.

As I read that, I realized I had already started this task with Amie. For one, as I wrote earlier, I don’t want her to be ignorant of where her food comes from: that beef was a cow, that sausage was a pig, the wood in the hearth was a tree, etc.

But it has gone further. Many months ago Amie had repeated nightmares about a dinosaur. She woke up screaming and often would refuse to close her eyes again, because there was a dinosaur in the room, or it was coming. The way we helped her through this fearful time was by simply telling her that the dinosaurs are dead.

“Dead means the dinosaur can’t move, can’t walk. Dead means he can’t talk, or listen, or look. Dead means his body is lying in the ground somewhere, buried, often even crushed to pieces. So he can’t get up and come here.”

She was quite resourceful. She said:

“But this dinosaur isn’t dead.”

“That’s not possible. All dinosaurs are dead. That’s why we call them a special word: ‘extinct’. ‘Extinct’ means that all the dinosaurs, without exception, are dead. So no dinosaur can come here.”

Sure, she was the only 2,5-year-old who knew the meaning of (and could pronounce) ‘extinct’. But hey, I believe in the power of words (and of their definitions, and of their correct application to the things in the world). And this was one clear-cut example of that power. Amie’s nightmares stopped.