We had two experiments going on here yesterday and part of today. 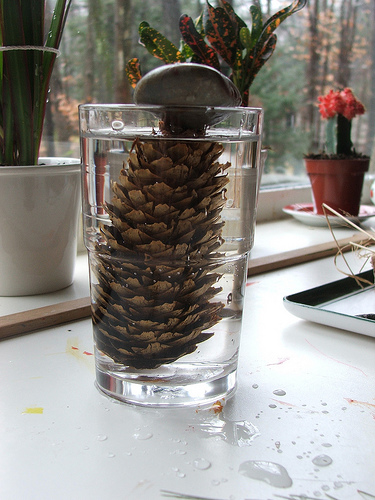 When we found this cone on our Outdoor Hour walk last week, we identified it as a Norway Spruce cone. It was wet and cold when we brought it in, and we (I) had observed that the scales were slowly opening as it was drying out, or as it was warming up.Â  Then I readÂ  Michelle’s cone experiment, which suggests it is the water that closes the scales. This makes sense: so the seeds won’t get washed or washed out. Yesterday we got to reproduce the test. (The stone on top was to keep the cone down in the glass.)

Amie was very into it as a Game With Water, in the living room no less! 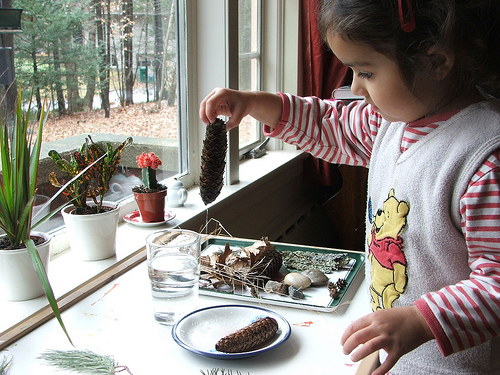 I took the lead, going on an on about seeds etc. But Amie really got the point once we had a wet and a (as yet) dry cone one next to the other. When her Baba came come she could tell him the link between wet and closed. 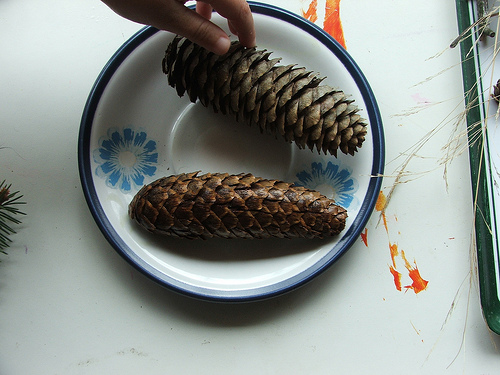 Isn’t it amazing? I mean, the cone is dead, right? it has been severed from its tree, even its tiny seeds have long gone… Yet it still moves, it still functions. Maybe something to do with the construction of the scales: contact with water produces a chemical effect that makes them contract in a certain way… Gotta find out exactly how that is.

{UPDATE} “The scales open when dry because their outer halves shrink more than their inner halves, and they pull away from the cone. When wet, the scales swell shut.” (here)

Our second experiment involved an apple that had gone mildly bad. We ate the good part and rather than throwing the bad part into the compost, I cut it up and put the segments out on our balcony, right in front of our big living room window. 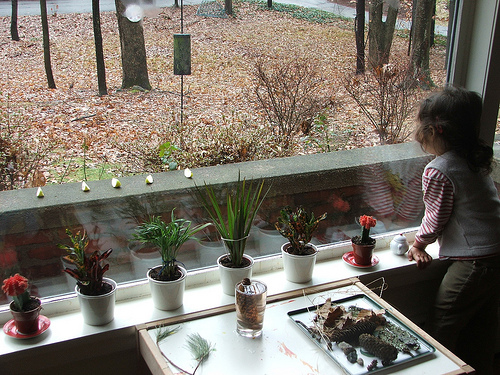 Who would come and eat it? 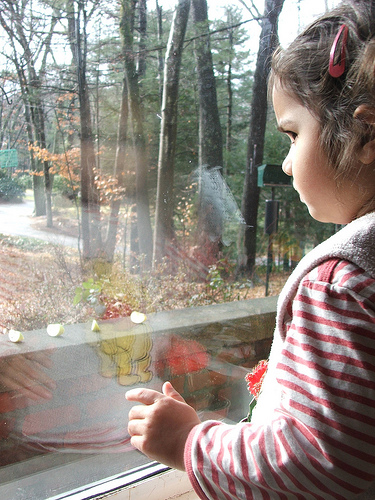 Not one animal touched the apples all afternoon, all evening, or all night! Then, today between noon and one, our resident squirrel picked up piece after piece, moving some to we-don’t-know-where (his nest? a “cupboard“?) and munching others in plain view on our balcony. We talked about how squirrels don’t hibernate, but chipmunks do (sort of, to some degree). We haven’t seen a chipmunk in over a month. 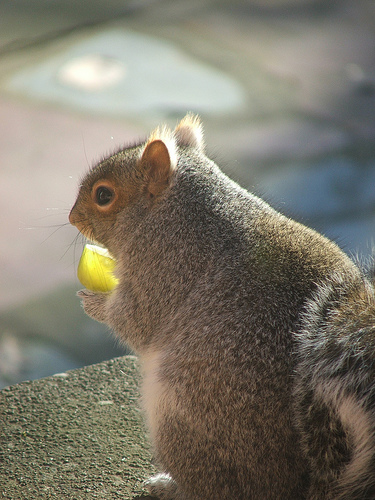 What a treat, to have been kept waiting and then to see the happy squirrel eat the apple made of the bright winter sun!

I also happened to read Mary Oliver’s Why I Wake Early yesterday. There’s this line, in “Something”:

and sometimes I am that madcap person clapping my hands and singing;

and sometimes I am that quiet person down on my knees