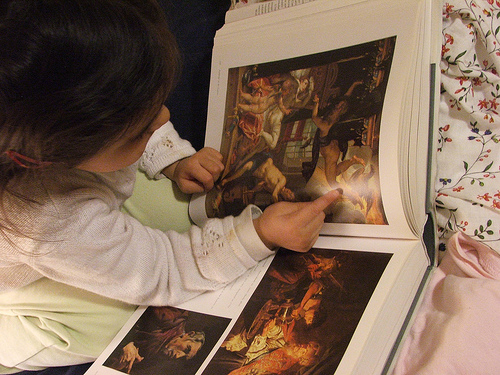 We were looking for a good example to draw from, and I pulled out the huge tome about Paintings in the Louvre Museum that DH and I lugged home all the way from Paris. We leafed through and as the book starts with art from the Middle Ages, the predominant image was of Jesus on the Cross.

“His name is Jesus.”

“He is nailed to the cross.”

“Because people didn’t like what he said,” I said (making it up as I went along).

“Is that his blood?”

She was fascinated. She leafed through the entire 1000-pager looking for more Jesus-on-the-Cross. She asked questions about details, like if he had a ledge to stand on or not. Then she also got interested in Jesus as a baby.

“There must be a picture of Jesus on the Cross as a baby,” she said. “I think that also happened.” 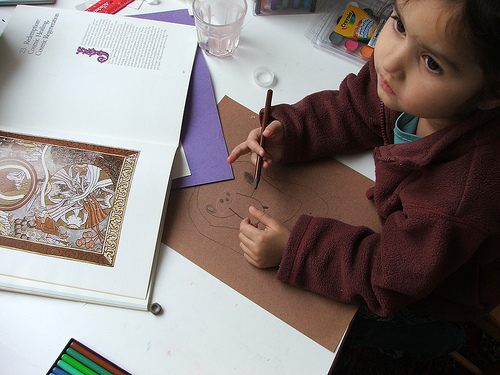 A couple of days later Amie was ready to draw Jesus. We got out our Hildegarde von Bingen book, from which she had already drawn Cultivating the Cosmic Tree and as expected she chose an image of Jesus on the Cross.

She drew the body and head of Jesus first, then the outstretched arms, and then she gave him a big smile.

I asked: “Really? Is he smiling, do you think?”

She looked closely. “No,” she said, confused. She always draws her human figures with a smile.

I suggested she keep that drawing but use it in another picture, and we found Christ Sits in Judgment.

“But he is sitting here,” Amie protested.

Then she solved the problem herself, by drawing a line across the figure’s body to indicate his knees. Then she spent a lot of time on all the circles that envelop him. 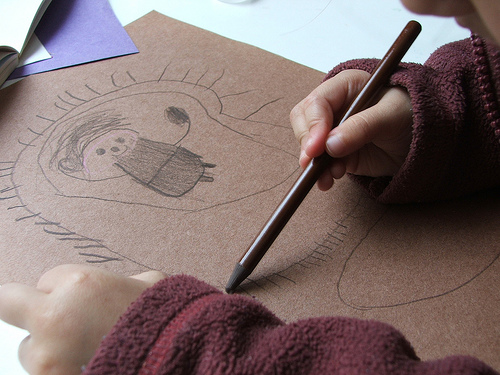 After a couple of days, when she again asked to see the big book with Jesus on the Cross (again without any prompting by me), I asked her: “Do you want me to tell you the story of Jesus?”

The answer was an eager yes. I should have prepared better, I think I made a mighty mess of it! Especially the question “Who’s God?” got me all muddled. But she was interested. Later that day she came to me and said:

“You know, in Jesus’ time, they called Jesus ‘Mama’. Did you know that? Some people called him ‘Mama’.”