Yesterday Amie and I made hotcaps (or some version thereof) for our lettuces, some of which are bursting out of their already large containers downstairs. I had hoped to transplant them into the cold frame before today, but the weather has been in the extremes. Three days ago, for instance, the max in the (unvented) cold frame was 130F, the min 43F.

As for the max, I’ve ordered a thermostatically controlled and solar operated arm that will lift one of the lights when the temperature reaches 70F. As for the cold nights, I hope the milder weather that arrived today will stick around till, oh, end of October or so…

Not wanting to take any chances, however, I decided to make some hotcaps for extra protection inside the cold frame. Not having any soil in the cold frame yet, our hotcaps need to be containers too. So I cut the milk jugs in half, leaving the two halves attached by about one inch of plastic. Then I punched several holes in the bottom and filled it with garden soil and composted Moo Doo. (*)

We made and filled about seventeen of them. Here they are, along with theÂ  lettuces on their first outing into “real” light:

It was quite a moment for them, and for me, as they emerged from the basement! They’re in our screened in porch, which lies to the north of the house, so they’re out of direct sunlight, in 55F. 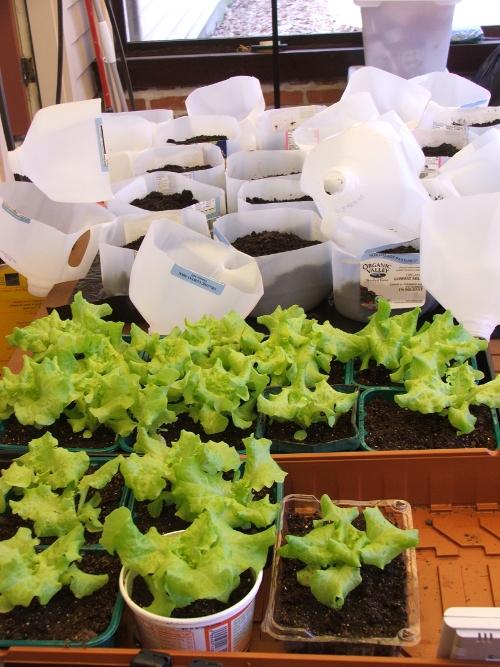 Once they’re hardened off I’ll plant them in the hotcaps and line them up in the cold frame. During the night I’ll close them. Here’s Amie demonstrating the idea:

(*) For “real” hotcaps you cut the bottom out altogether and just place the dome of the jug over the planted seedling.