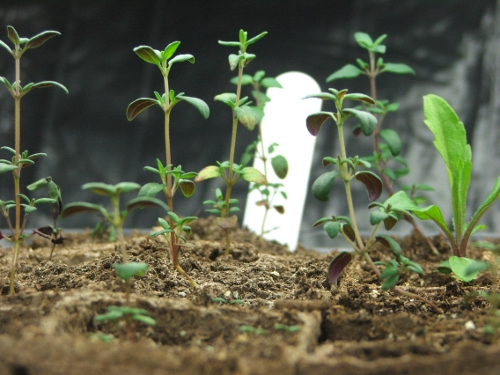 I think becoming a mom made me a better farmer. Before Amie came along, all my houseplants died on me. I simply always forgot to water them… or feed them. The herbs I grew on my steps when we were living in our condo survived because they were outside, getting rained on. But now I can’t help but have this sense of responsibility for all the little live creature in my care.This evening i ran out in the freezing rain to cover the cold frame with the lettuces with blankets and a tarp. They all have Amie to thank for that!

Still – sigh – two thyme seedlings succumbed (left in the pic) and one is not doing well. First of all, I can’t express how enamored I am with the thyme seedlings: the tiny pores on the green tops of their fat, small leaves, the delicate burgundy on the underside, and the stems all akimbo, reaching for more light.

Well, in any case, two of them may have succumbed to over-watering or over-feeding, I don’t know. Or under-watering: I transplanted them into peat pots ( the only ones on hand at that moment), and those dry out so much faster than plastic plugs. These two were on the corner of the pack and thus dried out even faster. They curled, then shriveled up and died.

Another one seems to be struggling (middle of pic, camera would not focus on that one): its leaves are also curling (down and in) and the bottom leaves are turning yellow and reddish at the tips.Â  I’ll see how it does tomorrow. :(

(In the pic to the right you can also see that mystery seedling: still don’t knwo what that is!) 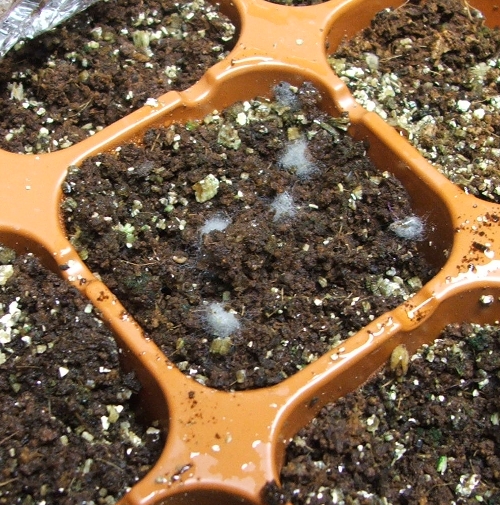 It’s one of my Ida Gold tomato plugs… I have to laugh now. I feel like one of those people who meet a doctor at a party and without further ado strip to show them their boil: “Doctor, what’s this?”

Well in any case, I sowed 9 plugs of Sungold, 9 of Glacier, and 9 of Ida Gold. I put them in the hotbox, which works really well. Only three days later about half of the seedlings of the first two varieties had popped out, and two days after that all but one of them were out and I moved them out of the hotbox. I could have sworn there were a couple of seedlings in the Ida Gold batch as well, which is (probably) why I took off the plastic wrap (as the seedlings were pushing up against it) but kept in the hotbox. Bad record keeping!

Anyhoo. Yesterday morning I found no seedlings. Not a sign of any: not shriveled or fallen over or rotted… just gone. I found, however, congregated in the middle plug, six or so fuzzy black balls. This evening they have become what you see in the pic. They look like seeds but, really, I couldn’t have sown 6 in one plug! I’m very careful to sow only the seeds I want, and thin only rarely. Is that fuzz really small roots, or is it a fungus?

When I first spotted them I immediately sequestered the set and set it aside. I don’t want to throw it away…

So, doctor, what is that? And more importantly, is it lethal?