I harvested the fingerling potatoes because I suspected Late Blight. If they had had one more month, they would’ve made for a good yield. Now… not so much. Let’s just say that 2.5 lbs of seed potato went in and less came out. 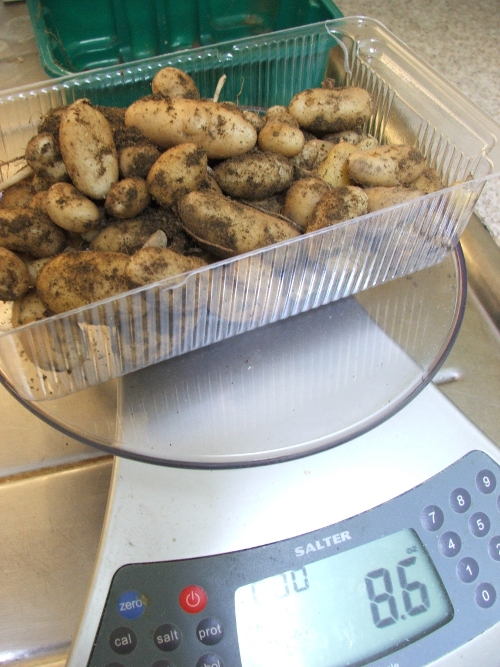 You do the math! And please don’t call them cute. Potatoes from my garden may be many things, but they’re not cute! But o my, were they yummy. So was the other dish, with homegrown onion tops and the first Swiss Chard – like butter, so smooth. 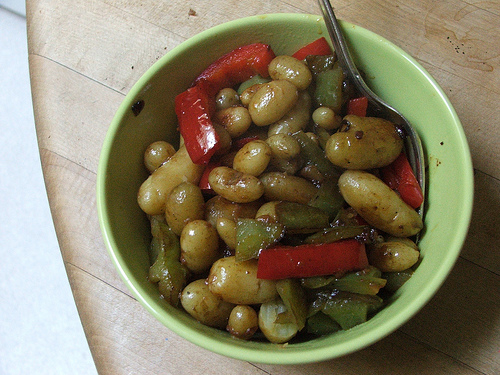 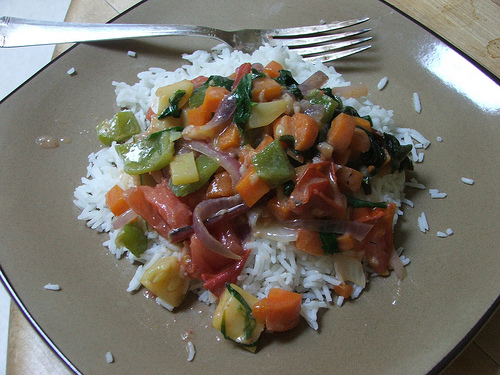 That dish also had homegrown basil in it, though it made for scrawny pickins, as the slugs have been doing a number on them. But speaking of slugs, let’s not speak of them again, as the iron phosphate seems to have done the trick. Only my herbs are suffering, so I’ll apply the copper strips around the base of the shelves they’re on.

I also finally got round to saving the beans (Lima, Provider green beans and Maxibel haricots verts) from their prone position after the pounding rains – which, for now, have relented. 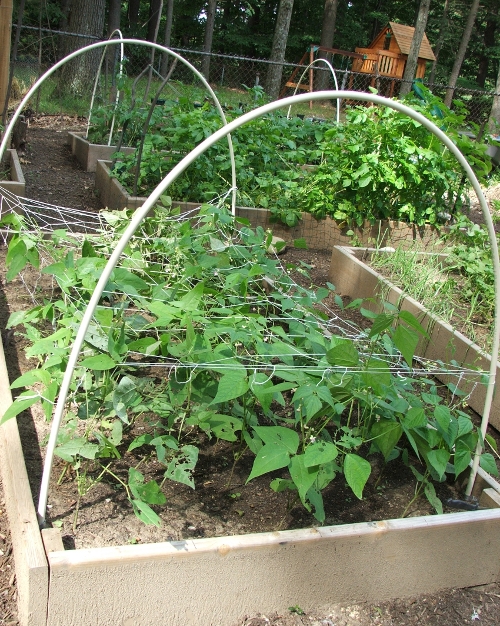 I got the nylon trellis at the garden center (way too expensive) and stretched it around the 1/2 inch pvc pipes which I got at Home Depot (at about $3 a pop). The latter are just the right length, bend all the way round with enough tension to keep them there, though I added some brackets. These hoops will be great for Fall and Winter, when the crops need more protection: I’ll throw agricultural cloth over them – still to buy, any suggestions?

As reported earlier Amie and I spent several hours on Sunday potting up some flowers. I caved and bought them at 50% off at the local garden center – flowers were not my priority, and I was missing their colors. Now our front door and balcony look colorful, at least. Amie had a blast, and the morning after she could be found sitting among her flowers, waiting for the birds to come and eat some seeds out of her hand. 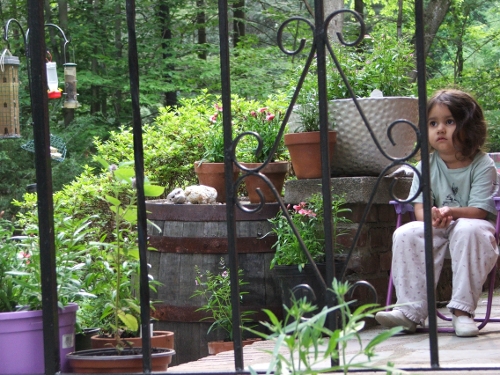 Today was a great day. Sunny, not too hot, and I felt on the mend from that cold Amie brought home. I made a push for it and finally finished the last two beds (nos. 10 and 13), stuffing no. 10 with seeds. No. 13 will home to a bunch of compost crops.Â  I also resowed some Kale and filled in the gaps left by the unfortunate Banana fingerlings and the French green lentils (pulled them, they didn’t grow nearly fast enough). As always, you can see my updated garden plan with all the crops here, at Plangarden. {UPDATE: bummer, this no longer seems to work, will try to fix it soon} {UPDATE: yipee, it works again!}