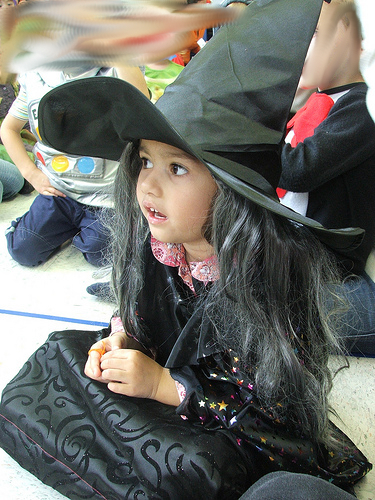 My first attempt at making a costume or even a piece of clothing. Amie chose the fabrics for the cape and the skirt and patiently tried it on at several stages. I sewed it together on my machine, sometimes laughing, sometimes crying, but mostly laughing. If there was a prize for the crookedest hem… But it all held together through much dancing, crawling and getting up and sitting down again.

The hat was going to be the trickiest part, as all our fabric was so flimsy. A friend, hearing of my predicament, gave us this hat (with hair attached) as a backup, in case the one I made failed to pass muster. DH however showed itÂ  to Amie before I could even attempt it, and that was that. 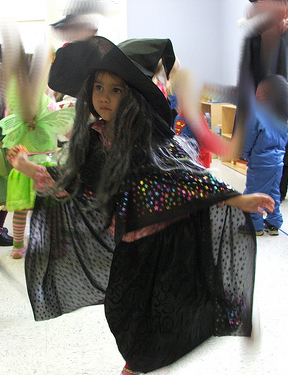 I figure I’ll be fine with my one-stitch machine and improvisation skills as long as Amie wants to be a witch or (even easier) a ghost.Â  Anything beyond that, I’ll have to get some sewing lessons.

I also baked about 30 big cookies in the shape of pumpkins for the kids at Amie’s school to decorate. And Amie and DH carved the first of the big pumpkins, and we roasted the seeds.

Can you believe it’s that time of year again?

UPDATE: It’s over. I stayed home and some kids did brave our long and winding and dark driveway for our treats. Amie and DH went out together into the balmy and windy night, under the full moon playing hide and seek behind the clouds.Â  They were gone for abut two hours. Amie came home expressing her disappointment that she hadn’t managed to scare anyone. She has about 20 pieces of candy – she took one at each house – and she is so excited about them, but I know half of them won’t even get eaten. DH is putting her to bed at the moment. I can hear her constant chatter. It’ll be a long night.