We went into the city to visit, among other things, the MIT Museum. Amie fell in love with Kismet, the emotional robot: 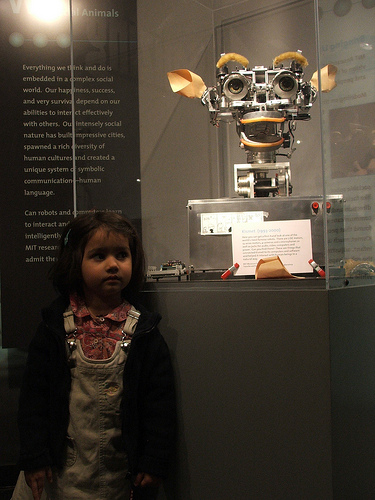 And I came back with a bug. That’ll show me to come down my hill…Normally, when I feel that kind of pain in my throat, it’s bad news. But I kept up with the elderberry (I have capsules with dried elderberry and elderberry syrup), and a day later it was no worse, andÂ  another day later it was slightly better, and today I am sure I beat it! This afternoon I might venture out into the newly cold, bright weather to put compost and straw on the beds.

But in any case, this is what I really wanted to post:

Lettuce was our first crop. I started the seedlings (Black-Seeded Simpson) in February and moved them into the cold frame up front in April. There they survived the last good frosts to make for a big bed of twenty very yummy lettuces. For a long time they were our only but seemingly never-ending harvest as I cut only the outer leaves, for many months. It was very satisfying. I even got to give some to our neighbors. I pulled the plants when they got bitter, though they never actually bolted. Unfortunately several of my in situ succession plantings of lettuce got eaten by slugs or drowned by the rains, so this turned out to be the only lettuce crop we had.

2010: Sow the Black-Seeded Simpson and some other varieties too, and more successions, all from seedlings indoors/greenhouse (not in situ). They don’t need a prime sunny spot. They will need the cold frame (which I can convert any bed to) or at least a row cover in the beginning.

I sowed the tomatoes at the beginning of April and all those seedlings made it into the garden, most in the beds and some in containers. Even though I kept potting them up and transplanted them at a deeper level each time, to make them stronger, the young tomato plants looked leggy and scrawny to me. They never did put on many leaves, and in the end what leaves they did put on were attacked by blight. But the yield in fruits was nevertheless successful, I think, or my first time growing tomatoes from seed.

2010: The plants probably didn’t succumb to the blight because I planted them so far from each other: 3 rows of 5 plants each in a 4’x8′ bed.Â  I’d like to grow more tomatoes next year, though. We’ll grow most of them in the movable hoop house and I am considering growing them closer together.I’d like to grow these varieties (Sungold is the best cherry tomato I’ve grown so far) plus some high-yielding plum or beef tomatoes for saucing. I need to fertilize the plants more often. And in the greenhouse I will have to keep an eye on the blooms, and probably do some hand pollinating.

After these two successes, a bad one, actually the worst crop of 2009: the potatoes. The Keuka Gold did okay, but the rest was a dismal failure, especially the towers. The towers probably didn’t get enough sun. I had to slash down the plants prematurely because of the blight, so many potatoes didn’t get to grow big enough.

2010: Let’s assume the weather and national blight don’t conspire against my potato crop next year, still I am considering not growing them again. Potatoes are an important part of our diet, they are easy to grow and maintain, they keep well in a simple root cellar, and organic potatoes are expensive to buy…Â  But I don’t have enough space in my garden beds. I could move the towers to a sunnier spot, but then I’d have to buy all that compost to fill them again (previous soil has blight), and I’m not so sure anymore if the tower system works (One Straw has his doubts too). I could get a community garden plot just for potatoes, but also our community garden were riddled with blight, so that’s out. Also, the seed potatoes are expensive, and they’ll probably cost more next year. If I grow them, I need to let them grow bigger, and find a way of shoring up the plants in case of heavy rains, and maybe grow them in buckets…