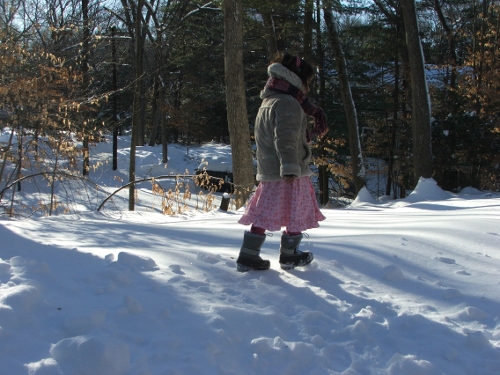 Amie walks on top of three feet of snow

Well, my ginger, chamomile and berry soda was a bust. It never fermented. But it did grow hair!Â Good for the compost, this one.

I got right back on the horse and added the next ginger bug in line (there’s always one brewing) Â to a simple wort of ginger, sugar and a few chamomile flowers (couldn’t resist). No honey this time. Instead of immediately locking the combination into a jar Â – like my first attempt, which was tasty but not bubbly – I am – as per my rewritten recipe – leaving it open to the air so it can draw in more airborne yeast.

Our weekend was very productive. My novel is out there now and I’ve already received one favorable review. We did the hive inspection, of course, which was my personal highlight. DH hauled in enough wood for two weeks – that was a great relief to me, the lack of wood bothered me. We borrowed our neighbor’s snow rake and pulled quite Â snow off our roofs – more as a precaution against ice dams than out of concern for the roof’s load bearing capacity.

We also set up our mudroom for finishing. It “just” needs painting, the frames, floor trims, ceiling trims Â and door trims to be added, and a cabinet of our own design.

But first things first, tomorrow: the seedling area in the basement. I need to get those first seeds in!

I also want to design and build a recycling station for Amie’s school. Something colorful and fun and unambiguous for the little kids. Any ideas?

Don’t forget to scroll down to see my adventure of today!