DH’s buckets with the wine grapes had company: my ginger soda carboy. The trouble in our house is that there is no place where the temperature remains constantly warm enough. My 1 gallon carboy was being moved from next to the wood stove, to next to the radiator, to next to the gap between fridge and wall, to a spot in the sun with a black t-shirt thrown over it. But as our thermostat is set at 60F, and as the solar gain nowadays gets us to 62F, the heat doesn’t come on, and it’s only when we fall below 62F in the evenings that we get the wood stove going. We keep it going till we go to bed, and in the early morning the heating comes on perhaps once to keep the cooling house to 60F.

Anyone who bakes bread knows that yeast is fussy about temperature, and my poor yeasties wereÂ not happy with the cold gaps and the temperature swings. My ginger bug died on me the day I made the wort (bug? wort? read all about it here), so I cheated and spiked it with bread yeast. It was bubbling away within an hour and I added it to the wort in the carboy, along with the juice of an orange. Â Five days now I’ve been trying to keep it going, by moving it around and stirring it to aerate it to prevent it from turning alcoholic, and it remained a sluggish one. Â The longer you wait to bottle your ginger beer, the more chance there is that it becomes alcoholic, but you also want to make sure the fungi have done enough of their thing that they don’t go berserk in your bottles, over-carbornate and then explode them (it happens!).

Today after the wood stove heat Â got the bubbles going again I tasted the decoction and to my surprise found it already too alcoholic, so it wasÂ time to bottle. 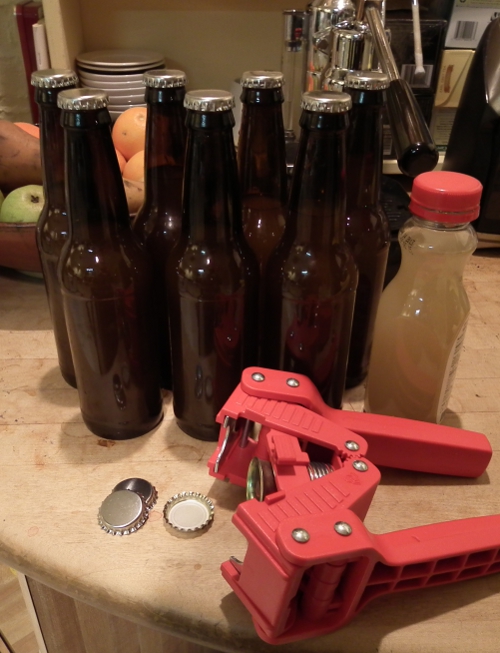 Not having a siphon, I strained out the “lees” or sediment (ginger and dead yeast) through several layers of cheesecloth. My 1 gallon carboy yielded eight 12oz. bottles. I found that capper at the give-and-take at my town’s transfer station: thank you! The bottles are from root and ginger beer that I’ve saved up over the past year.

As for that plastic bottle, a great trick is to keep some soda into a plastic bottle, so you can squeeze it to check on how tight it’s getting in there.Â This plastic bottle, the same volume as my glass ones, will see good use because I never buy plastic bottles (except for, painfully, milk containers). I’d rather be thirsty than buy one. Yet, I learned my lesson the last time when I opened a bottle of soda. And for that reason, as an extra precaution, this is where the capped bottles went: 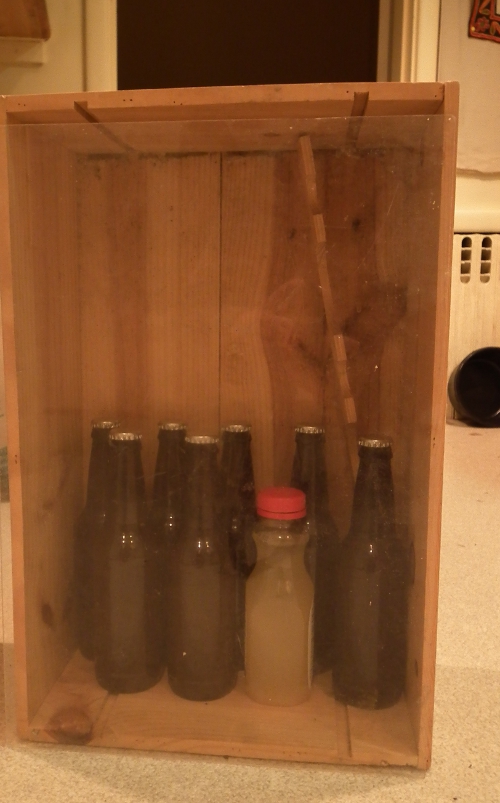 In a wooden case with a sheet of plexiglass in front of it. I then turned it and placed the plexiglass side up against a cupboard. If any explodes, it’ll be a mess, but a contained mess.

Other happening ferments: I am baking bread again, using the BreadMan that we got for our wedding (12 years ago), and a friend is growing a kombucha mother SCOBY for me. I’ll go pick her up next week.