Today I went into five hives, three my own and two of a BEElieve beekeeper who broke his ankle. All but the latter two were in the full sun. Today we also had a heatwave at 93F. And in the morning, before my bee run, I spent an hour with Amie’s classroom planting poor wilting seedlings into the School Garden, also in the full sun. Then Amie had a Â swimming lesson in the open-air pool. It was all a bit much and I came home in need of a nap. Imagine I had even thought to add bean-sowing of the Community Garden plots to the mix. Talk of overestimating one’s resilience!

But some good news: I found eggs in Hive 4, which I thought queenless after dequeening/requeening. I alsoÂ found the honey super on Hive 3 to be almost entirely full of Spring honey and added another super. Hive 3 also supplied me with a frame of brood in all stages, most importantly the no-older-than-three-days stage. I needed to introduce these eggs/larvaeÂ into Hive 5, the split that I againÂ found to be queenless after giving it yet another $27 queen. Â They must have killed that one off as well! Well, nowÂ they can make their own queen thank-you-very-much!

Look at the two sides of that frame: the ideal half moon pattern of brood in the middle, pollen and honey in the corners. 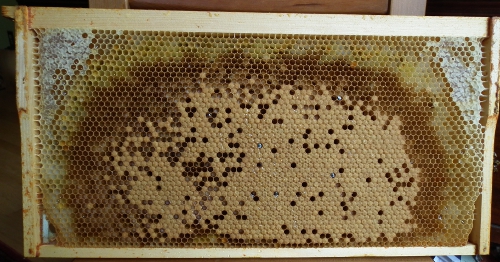 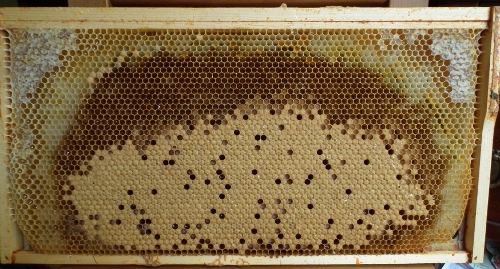 Macro photography becomes possible when there are no (mature) bees getting impatient or in the way. 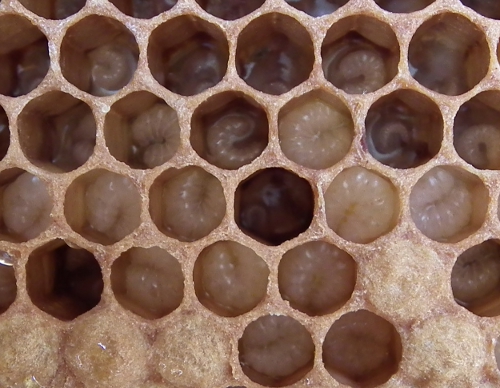 And here are the precious eggs, some only a day old. Only eggs/larvae younger than 3 days can be turned into a queen. I hope they survived the transport to Hive 5, and that Hive 5 appreciates them! 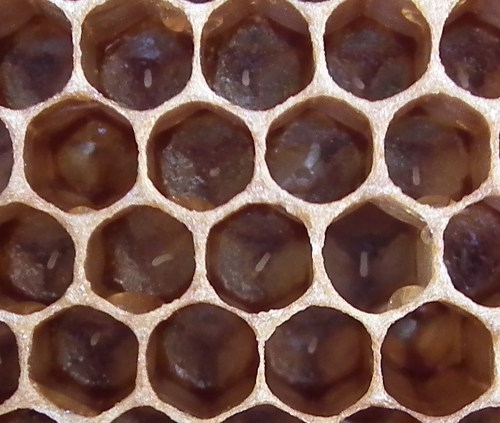