What a GREAT day.

I was up at 3 am when Amie was coughing and then had trouble falling asleep, all the things I had to do running through my mind. Then the alarm rang at 6:30 Â and at 7 am I was at the Community Garden Plots, which no longer looked pristine like they did June. The thousand beans we had seeded had been chomped down to the ground and the heat and humidity had favored the weeds, both the mints and green weeds in the field and the woodies like bittersweet and gigantic pokeweed along the fence. In fact, the plots looked worse than how we found them at the beginning of the season. It was very discouraging.

(So far it doesn’t sound like a great day, and I’m not fond of sarcasm, so…)

Three friends showed up with a lawn mower and an array of gardening tools and what followed was two hours of pulling, chopping, hacking, mowing and chatting and laughing. In the end we had two huge compost piles of weeds, hands that won’t get clean with even the most vigorous scrub, and a plot that’s again ready to go. What a difference: we wowed ourselves and each other! AndÂ I didn’t take a picture, neither before nor after.

Now it’ll be a race against the weeds to find and sow buckwheat, which we decided to put in to smother the weeds and improve the soil. This season we won’t be growing any edible crop anymore, but at least we can make the best preparations for next year. I’ve been calling and leaving messages at the local farms asking for a stray 15 lbs of buckwheat seeds. We’re also going to start plotting some serious fencing.

I came home and gardened (weeded) in my own garden, then my friend L. came by with yet another quart of home-picked raspberries, and I gladly gave her some more kale and also six eggs. Then my friend R. came by and brought beautiful bouquet of flowers from her garden (she knows I don’t grow flowers for their prettiness).

Then Amie and I met a bunch of yet other friends at a local school and all of us (four adults, three kids) picked Â at least eight quarts of blueberries. What a treasure! We couldn’t stop thanking the landscape designer who decided on these berries! (And also the masses ofÂ rosa rugosaÂ with huge hips ripening). The kids just couldn’t stop picking and eating. They could have gone on for hours. We brought home three quarts and one pint. 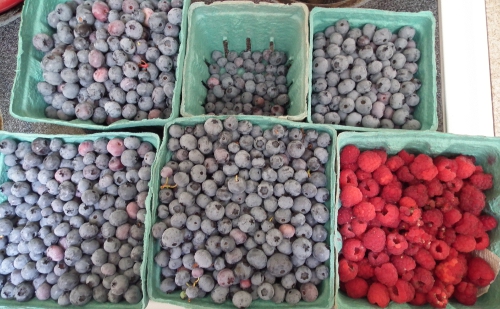 So much treasure! Weeds, flowers, berries, and friends. I am the luckiest person on the Earth.

{UPDATE} 7/12: We went blueberry picking again and then I had enough to make twenty-six half pints of jam, mostly blueberry and some blueberry/raspberry.