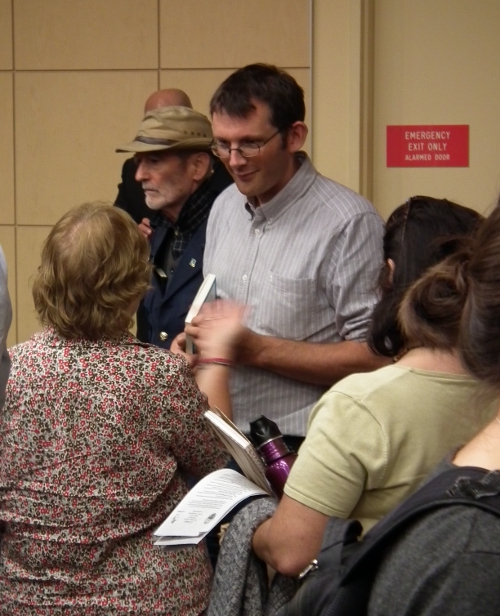 Yesterday my friend R and I carpooled into Medford to see Rob Hopkins speaking at Tufts University. We walked into the crowded room and someone called, in a British accent: “I know you!” I turned and there was Rob Hopkins. He had recognized me from our “just get going” segment in the movieÂ In Transition 2.0.Â We chatted for five minutes about how thankful we are that he came, Â about his tour and about my town as well – he was genuinely interested in what is going on in Wayland. It was also touching when he said this would be the longest time he has ever been away from his kids.

The audience was about half Transition crowd, half students and faculty and others interested in Transition as well as in the other two speakers, the mayors of Fitchburg and of Medford. Rob’s all-too short talk was delivered in his usual familiar, passionate manner. Even though I’ve read up on Transition, obviously, and Â took trainings and “talk” it all the time, there were some insights and turn of phrases that were new to me. I particularly liked three elements.

One, how in many core groups, at a certain stage, there develops a need for special support for the middle. Rob likened the core group to a donut: it spreads outward, which is great, as it grows, but often time there develops a hole. Groups would be more effective, and happier, if that middle weren’t empty, if someone held it. But that also means there has to beÂ support for that person, and that’s what the Transition Network is working on. At this moment, for us, the person holding the middle would be me and boy, did that message resonate! Not just that I would be supported, but more importantly, that anyone in the middle would be supported. Meaning, of course, that if I had to take it easier or even step aside, there would still be someone to take my place, unafraid of the ‘whelm.

The second aspect was Rob’s emphasis on the economy, on how Transition should see itself as a new economy driver, the creator of a new local and sustainable (non-growth) economy. Our group too is slowly veering in that direction as we investigate the possibility of founding a co-op. It looks like the Transition Network is looking to push the importance of local economies in the global world, with this report, well worth reading. A quote: “Growing the community resilience movement to the national and global scale thatâ€™s needed will require the fullÂ support and participation of the US environmental community.”

The third element was Rob’s response to a question from the audience: should Transition groups walk in protest? Rob’s answer was nuanced. He thought for a minute, then said: “That is not for me to say.” Then he said that on the whole Transition is so positive and inclusive that protesting againstÂ things may get us pigeonholed and thus undermine our role.Â He said that Transition groups shouldn’t shirk away from debate and can be great catalysts of debate. Â But again, he stressed that it is up to every group to decide. (Rob wrote about this here.)

I had thought at first not to go to this event. I am very suspicious of, even allergic to, gurus. When someone tells me some guy’s brilliant, they’ve not done that a person a favor in my eyes. (I’ve written about this before,Â here.) But I can report that I need not be suspicious here. Rob’s not a guru, and doesn’t want to be. I can imagine how weird it must be for him to come to these things and be thought of as having all the answers and be stared at. (I admit I did a bit of staring, but just because he caught me by surprise, and because he’s much taller than I thought he was, and just for a second or two). Â His demeanor and his explanation of Transition, as well as, for instance, his answer to the protest-question, put any misgivings I had to rest.

That’s the whole point of Transition: there is no guru – one who knows it all – and the network Â is each and everyone one of us, equally and together. I hope everyone in the audience got it too! I’m so happy I went.

THANK YOU, ROB, for starting thisÂ andÂ giving it away!

If you have the chance to meet Rob Hopkins on this ONE TIME ONLY tour of the US, make sure not to miss it! His schedule is here.