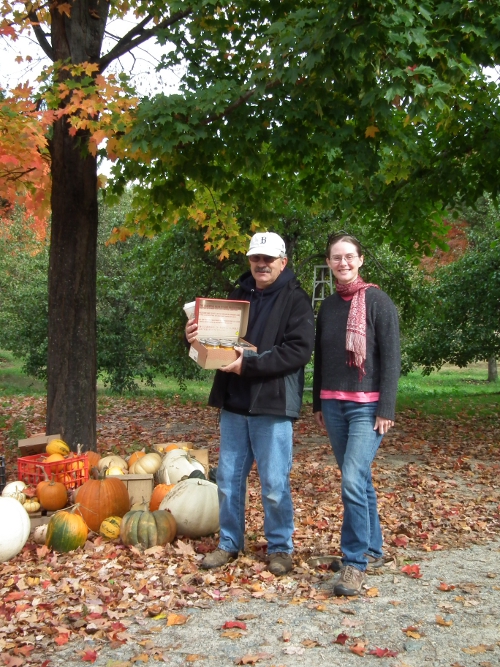 It’s been almost two months since the tribe canned the peaches, but our common purchasing did not end there. We also divided almost 7 lbs of locally grown garlic seed among ourselves, and this Thursday my friend and fellow-blogger Andrea hopped in her car and set out for the same farm that sold us the peaches. 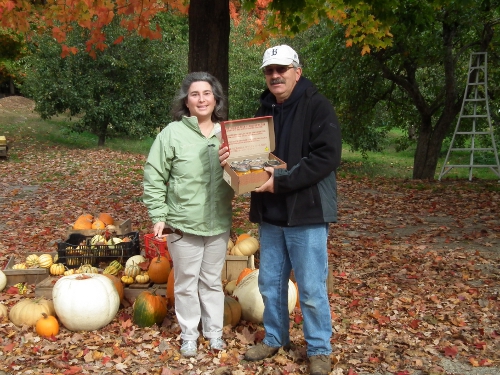 We pulled up and were approached by two men, the farmer Tommy who we had been dealing

with, and his brother, David. David introduced himself with “Hello, I’m single” and that set the tone for the hour-long visit. I’m sure they found the two of us as much a couple of odd ducks as we them!

First thing we did was offer themÂ our gift of canned peaches (peach salsa, peach jam, peach butter, peaches in syrup and peach pickles – one of each). They proudly showed usÂ the post and beam farm shop they are building themselves. They are four brothers, the third generation to be farming that orchard together, and their mother still manages the farm store.

Then, down to business! We asked for utility “Macs” (McIntoshes) but they didn’t have the five bushels we wanted. Tommy repeated the generosity he had shown us before with the peaches (giving us firsts for the price of seconds) and offered us Honeycrisps for the same price ($10 for 20 lbs or a half-bushel). We ended up buying 11 half-bushels of those and they threw in an extra box.

I had spotted an enormous bin with pears and asked about those. They were my favorite pear: Boscs, just picked! Andrea and I looked at each other, Â twinkle in our eye. O what the heck! We bought three more boxes of those, for the same incredible price, and were given another free one. We munched while they sorted the pears into the boxes and talked food and farming and generally joked around. We thanked them profusely for their generosity and we could see they enjoyed having given and made a good deal for themselves too. Everyone was happy.

Looking around the orchard as we drove off, all that fruit on the trees and on the ground – it’s been an amazing fruit year in Mass. – we feltÂ uplifted by the abundance all around us, of this incredibly fertile land and of farmers who still take care of it, and with whom we formed a community of sorts, and of friends with whom to admire and share the bounty. 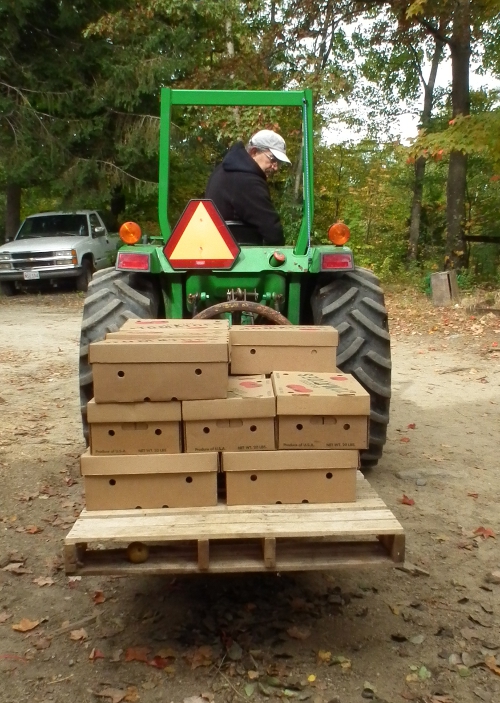