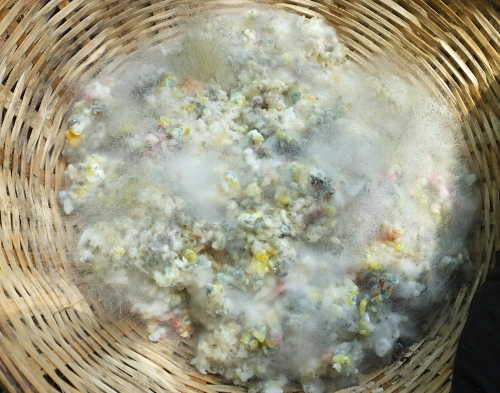 Another oft-used (and used in quantity) cohort of living allies in Korean Natural Farming isÂ  IMO: Indigenous Micro Organisms.Â  The IMO “input” is made in several steps, from IMO 1 through 4.Â  IMO 1 is the “catch” of said microorganisms, and in each subsequentÂ  step you get to culture these, growing their quantity until you potentially end up with a big pile. The first step, where you trap the organisms, is proving tricky for me. My first attempt got eaten and soiled by a mouse or some such; it went to the chickens. My second attempt at IMO 2 looked like this:

Closer, but that too isn’t going to cut it; it went into the steaming, youngest compost pile.

The recipe for the “bait” is pretty simple.

You can find anything in your trap. What you want to find are certain aerobic microbes – hence the need for a fluffy rice with air pockets and head space for them to colonize. When you collect in a forest, among the leaf litter, you will catch mostly fungal hyphae. Among grasses, you will trap a more bacterial crowd. If you want to grow grass or grains, go for the latter. For growing veggies and perennials, the fungal stuff is the thing, because fungi are great companions for plants.

The fungal hyphae with which your rice is now “contaminated” should be white and fluffy and have a sweet smell. The stuff in my basket was predominantly red, yellow and black, and it smelled moldy, because I had caught mainly molds – which are also fungi, but not the kind you want (FYI, check out this amazing video on mold growth). I think this was because the rice was too wet.

The next steps, which I’ll write about as I get to perform them once I’ve managed to trap the IMO, are basically to feedÂ  this handful of organisms so they multiply to greater and greater quantities. To summarize, the IMO first colonizes 1 cup of rice (IMO 1), then rice and as much brown sugar (IMO 2), then 150 lbs of wheat bran (IMO 3), then all of the above plus as much garden soil, totaling over 300 lbs (IMO 4), at which point it is ready to be brought, with much fanfare, into the garden. (Go here for a nice reportage, with photos, of a workshop by Aaron Englander, similar to the one I took. It covers IMO 1- through 4.)

The whole point of IMO is to trap indigenous organisms, because of the ecological and economic advantages of closing the loops by not using imports, and because these indigenous micro organisms are already acclimated to the general environment where you want to put them to use – though of course it would be more accurate to say that they made and make that environment. So if you can, it’s best to look for them in the duff in undisturbed areas under the trees, at the bottom of an old leaf pile, or in a mature compost pile on your own property, or in the vicinity. The farthest distance the IMO travel is, in my case, about ten feet.

Notice the wordsÂ old, mature and undisturbed. If your garden is a place of disturbance by digging, tilling, and applications of antibiotic chemicals, then the soil there will be “young” or “poor” at best, dead at worst. You want to bring in the robust, mature, complex life that has evolved to the most it can be in nature, away from modern man’s interference. And once you’ve brought in this life, you want to keep welcoming it by minimizing disturbance by going no-till, chemical free.

Ideally, as you let the IMO colonize more and more substrates, the garden itself becomes the IMO 5, as it were. But even the least disturbing farmers, treading the most gently on their soil, still have to dig for those potatoes, tuck in a seed orÂ  seedling, pull the occasional weed. Therefore IMO 4 is applied regularly on farms and in gardens. The poorer your soil, the more disturbing your gardening practices, and/or the further away your IMO was collected, the more it will need to be applied.

I made three more batches of rice and buried them in different places:

This way I’m hedging my bets and, in the spirit of diversity, it makes sense that combining microbes collected from multiple sites will make for a more robust culture. Stay tuned.