This is a long but uncomplicated and happy post ;) 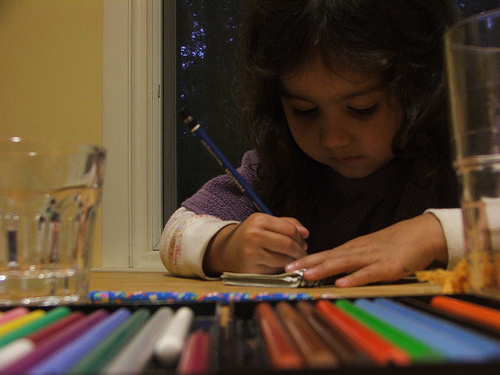 Yesterday Amie told me” “I want to see all the people and the cities and all the things in the whole world, and listen to all the music” [we were listening to a Mozart symphony]. “I want to be a music listener, and an artist, and a science too. And a drawing maker.”

She has been doing a lot of arts and crafts, especially while her artist grandmother was here. There were some collaborative pieces, some parallel work. 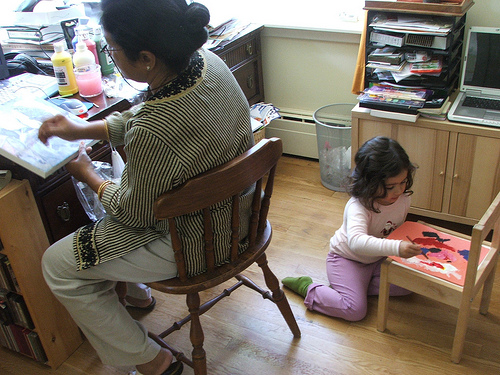 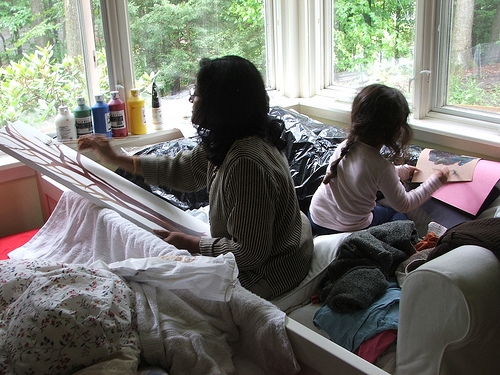 One evening we all sat around the table and drew each other. So much fun! The first is Amie’s portrait of Dada (her grandfather) of that evening, the second she made later on. Notice the extra circumferences and lines: 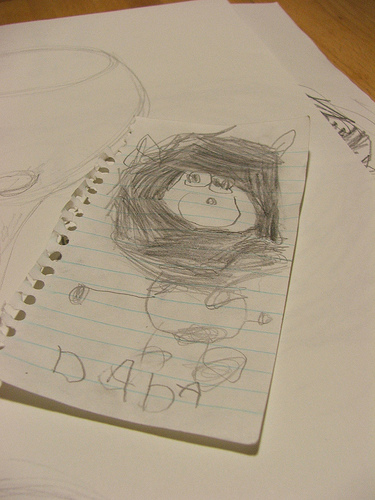 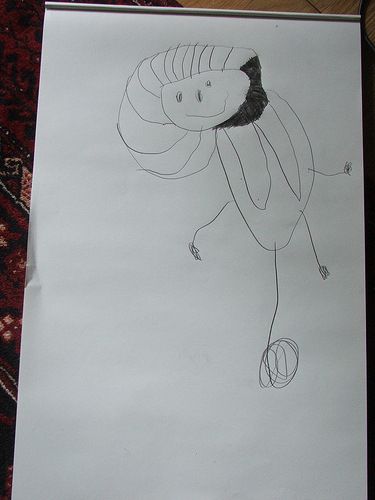 She made those same “extra” lines in this drawing of Piglet (from Pooh): 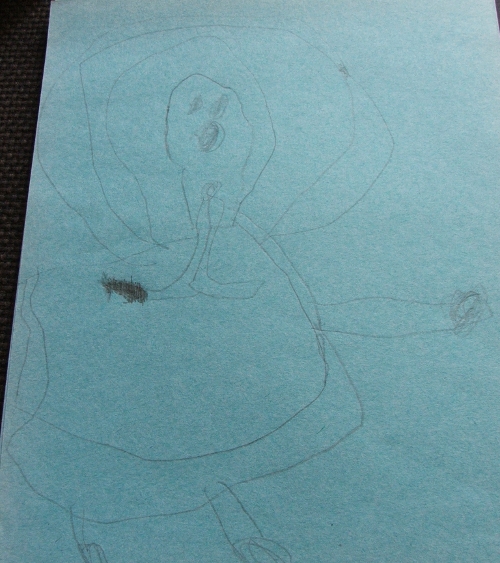 Such emphasizing is also visible in this next one, which she is still working on: the Bog Monster! 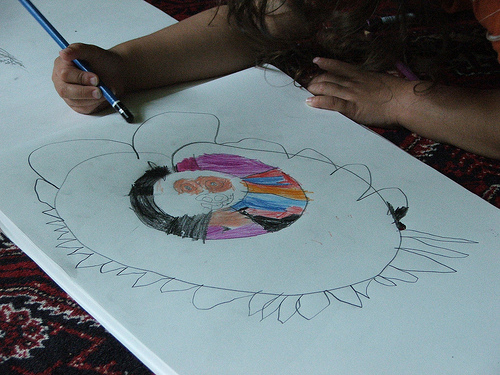 I love that piggy nose, those red, goggling eyes, and its humongous body all around it!

She is obviously experimenting with several techniques and “visions”. Sometimes there is a great attempt at naturalistic realism.  In the second picture, above, Thhaam was painting from this picture of a moth that I took in May, and Amie also drew it, and the stone it is “sitting on”. She got all its wing parts: 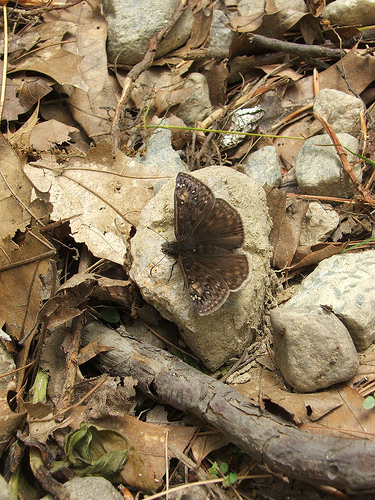 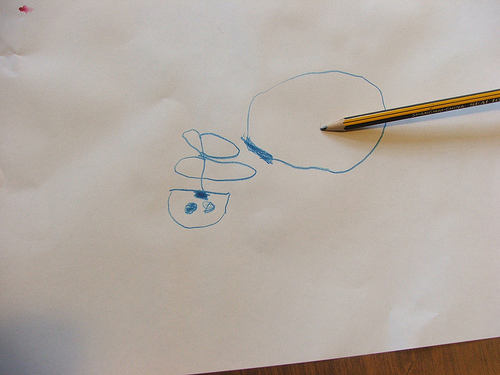 Funny, how she is still drawing from a concept of an animal. Same here, in this drawing of a dinosaur from her book. She got those facial  plates and scales right,  but insisted on the human-shaped body: 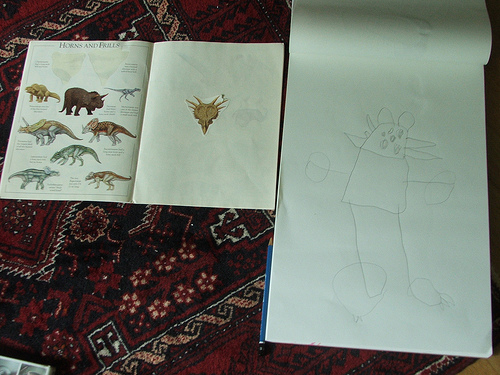 Later on she wanted to paint a cat and we gently prodded her about that body shape. “How many arms does a cat have?” “None!” “How many legs?” “Four!” Are the legs underneath its body?” “Yes.” The result has been stolen (taken by her aunt, I suspect, before I could properly record it!), but I asked her to draw another cat (this time without making any suggestion) and she obliged: 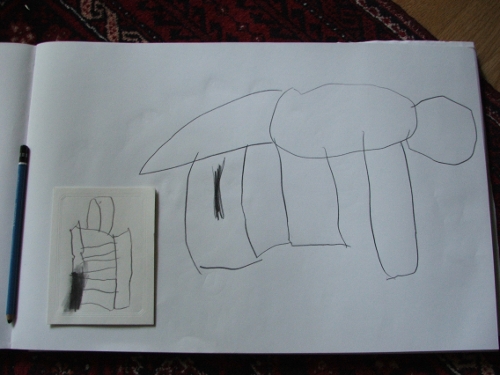 The small drawing in the bottom left corner is of a chair: a great experiment with dimension and perspective. Which brings me to this, the drawing of the ocean at Cape Cod (my apologies to the artist for the bad picture): 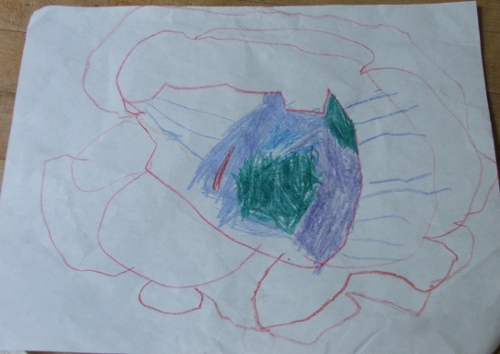 That’s the sea, and the waves. When we were looking at a map of Cape Cod, I pointed out the land and the ocean. She asked: “But where is the sky?”

It must all look so different, in her head!

Lastly, here she is drawing with chalk on our driveway, hidden behind the flowers she and I spent two hours potting up yesterday (that’s another post): 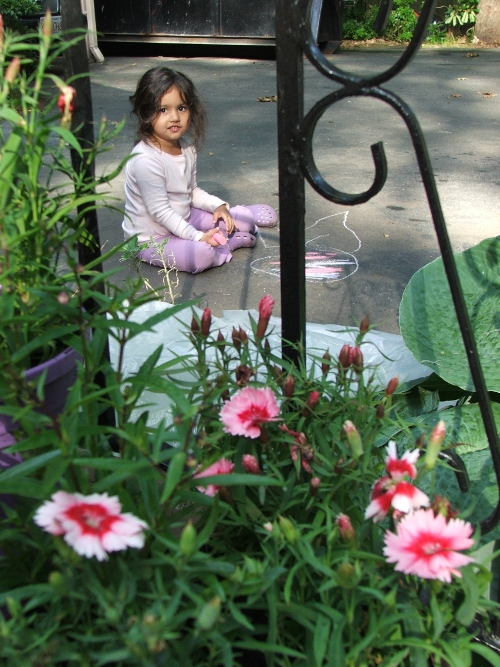 But, on the other hand, she brought home a little bug from summer camp (of which she missed the last two days and was heartbroken). The doctor nearly sent us to the ER (all the way into Boston!), but she made a great recovery right there – the threat of a shot helped. Then she passed the bug on to Baba and myself.