Amie is at the moment in her tent, erected with sofa cushions and a sheet in our living room a couple of days ago. With the aid of a flashlight she reading aloud from an Usborne Farmyard Tales book. She has made strides reading. If she keeps it up, she’ll read fluently from, say, Henry and Mudge, in a couple of months. She is also getting better at addition and subtraction, and is “getting” the rudiments of multiplication. One of her favorite sayings these days is “seven plus seven is fourteen. That’s two times seven, you know?” She says this almost once a day. The “you know?” and “right?” are added for  emphasis, or rather coercion. They mean “don’t you disagree with me now!”

I must admit that we haven’t kept up the “bridge schedule” we had planned: 3 pages of  math (we use the average exercise book) and 3 pages of reading/writing (Explode the Code) a day. Our family life  this summer has been in a mess (in a fun way, mostly), and we’ve not been disciplined enough. Especially her writing has suffered, but I’m happy enough with the reading. She is realizing that to be able to read a book yourself is a real treasure and privilege. Now comes our task of finding good books for her.

There has, of course, also been lots of art making. When Amie’s Dada (paternal grandfather) suggested that she become a doctor – a real doctor, not a Permanent Head Damage kind of doctor like her Mama and Baba – she immediately and vehemently protested that she was going to be an artist.

There was drawing from nature. With Thaam, the few sunflowers I managed to grow despite the squirrels and chipmunks: 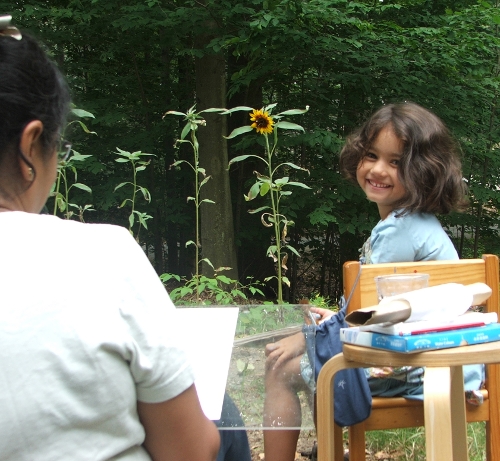 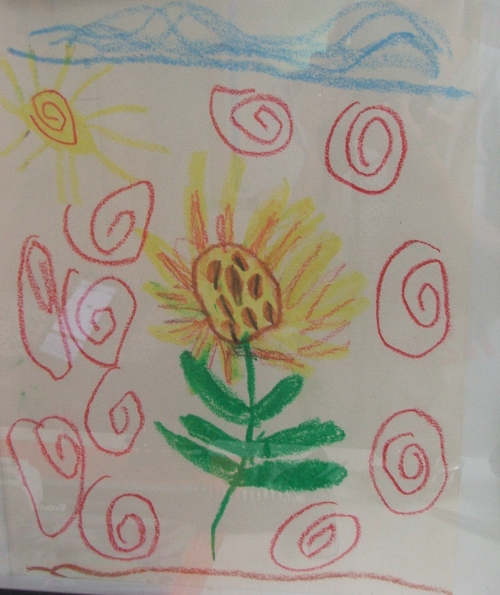 The butterfly we caught: 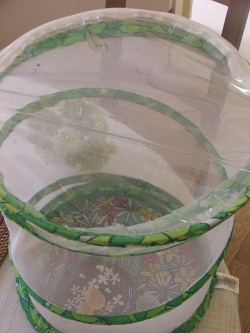 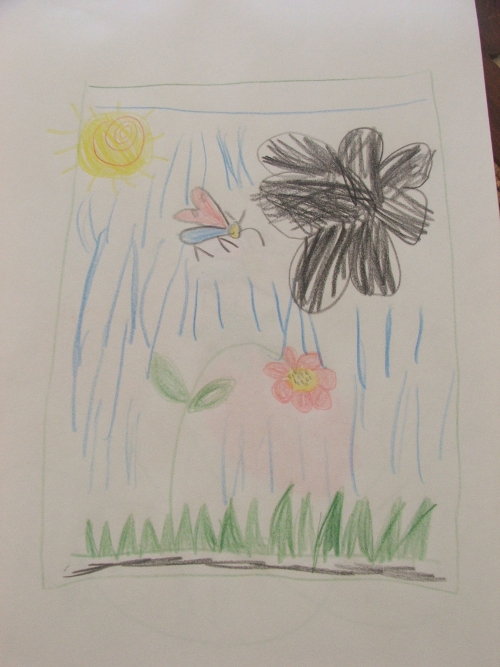 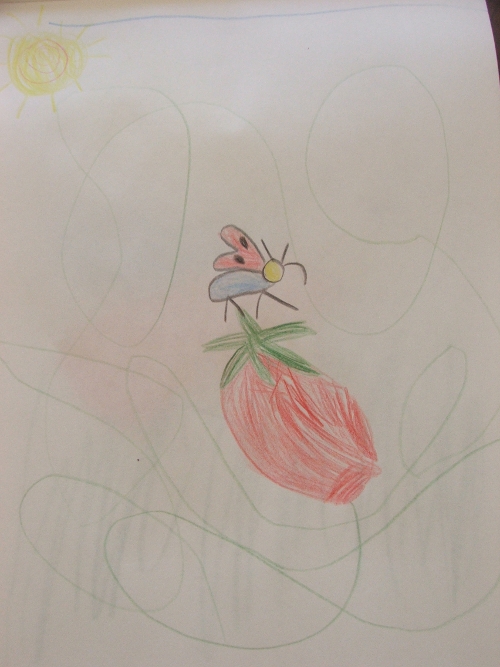 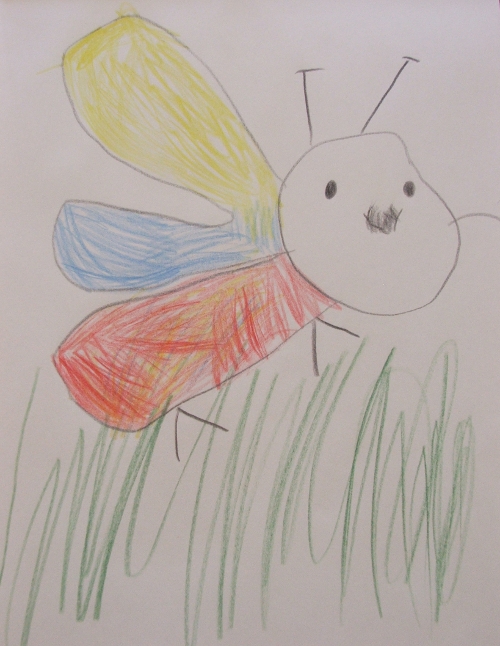 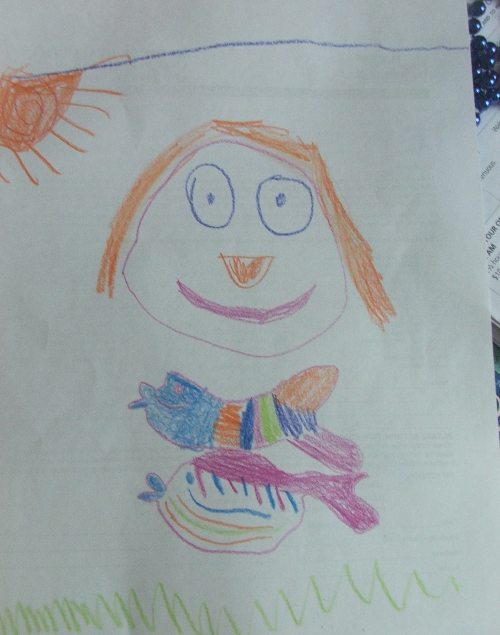 And lots of drawing from imagination: 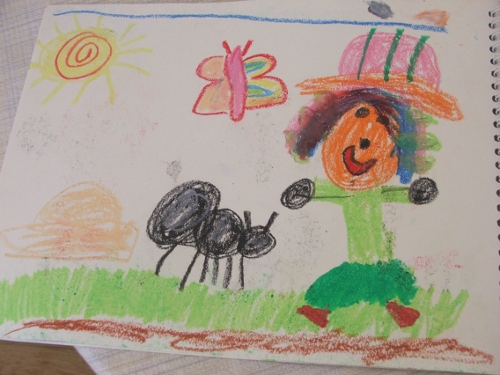 Under the influence of her grandmother she has learned all the songs from The Sound of Music. I’ll try to capture her singing “Do a Deer” sometime and post it. It’s very cute, but after the fiftieth time I have ask her to sings something else. 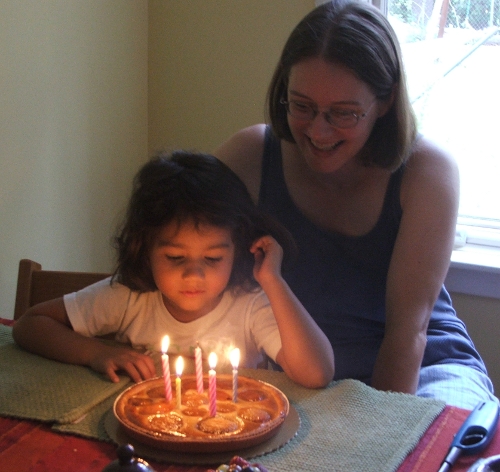 Amie turned five this August – we both blew out the candles because she was, of course, born on my birthday (it’s all hers now). We had a mega party (potluck). Though she was on the verge of angry tears for a moment, when I told her I had asked people not to bring presents, she bravely listened to the reasons and then agreed. Some people broke the rule anyway (grrr!), so she did get some presents, including the pottery wheel in the picture. It needed some Mama magic to make it work. 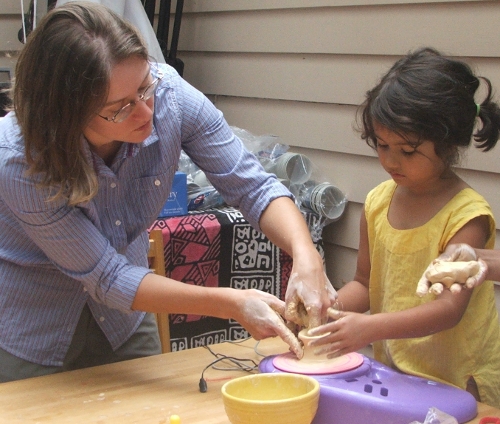 The most important event was that magical two-week play date with her friend from New York City. One week they played and swam in Cape Cod, the next week they spent playing here at home. E. is a year and a half older than Amie and they get along so well. E at 6 is a fluent and voracious reader and that was a great model for Amie. They played intensely and when it didn’t work so well anymore they had no problem separating and finding a spot to be by themselves a bit. 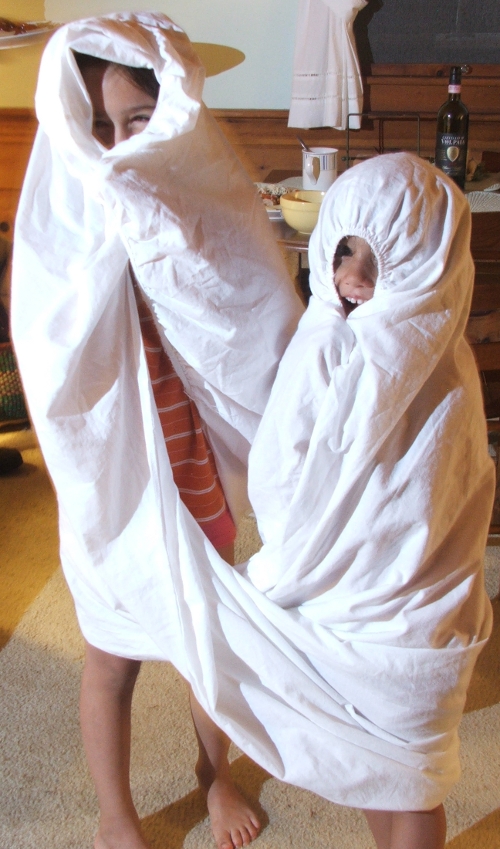 When you ask her “What will happen in September?” she’ll respond: “Pottery class with Lisa!” I enrolled her in a hand-built clay creations class with my teacher, Lisa Dolliver. Let’s see how much she will insist on working on the wheel –  wheel throwing only starts at age 11. She’ll be getting a break as it is, because the clay creations class only starts at Grade 1… Oh, and then there is, of course, also Kindergarten.