Over the holidays we made several visits to several Natural History Museums. Amie was keen to see the dinosaur bones. When she was 2,5 years old she learned that the dinosaurs are extinct. She was having dinosaur nightmares at the time and our discussions about their demise and the meanings of “extinct” and “dead” helped her defuse her fear.

So it’s the first thing she will say about dinosaurs: “They’re extinct!” ButÂ  seeing all those bones, I think, really brought it home to her. This is Amie getting up close and personal with the T. Rex in the Museum of Natural History in Washington, DC. 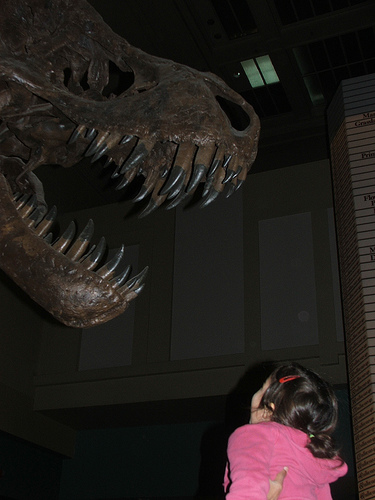 I wish I had captured her face: she is squealing with laughter. It was also, as you can imagine, a great opportunity to talk about scale and measurement.

We especially like the American Natural History Museum in NY, which has the largest collection of real dinosaurs bones in the world – and the entrance fee is at your discretion. On our second visit we brought Amie’s friend and drawing buddy, E, along. We found a comfortable bench with Tyranosaurus Rex towering over us and the Apatosaurus – which you may know as the Brontosaurus (*) – in full view on the other side of the hall. 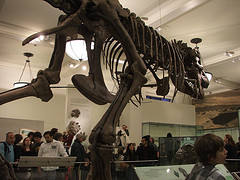 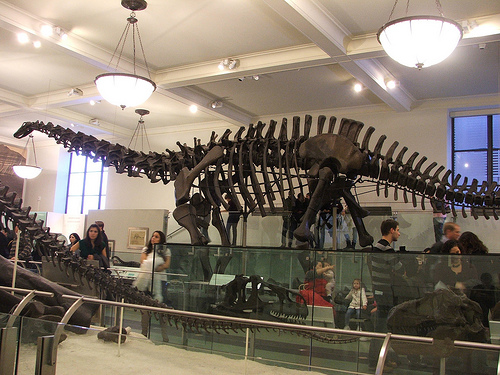 We started drawing right away. 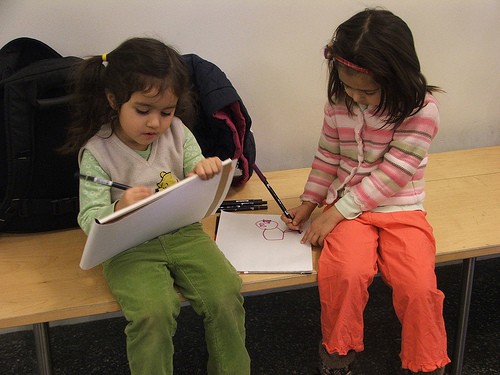 E asked me to draw the Apatosaurus (all those vertebrae!) and she colored it in. 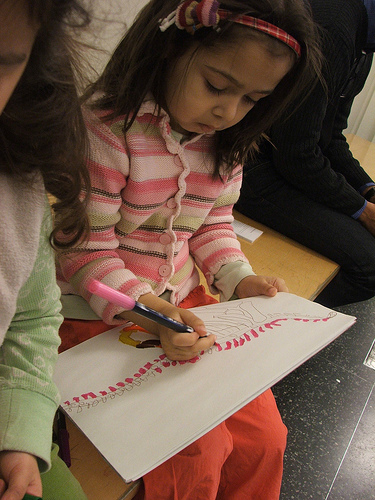 Amie drew the T Rex, but unfortunately I wasn’t paying the exclusive attention I usually do and failed to supply a new, blank sheet – and sequester the finished product – before she proceeded to color the whole thing in till it became a big brown blotch.

I like this take-your-drawing-pad-along approach to the museum. It helps the child focus on one room or even one thing, especially in a huge museum. And it helps the caregiver catch his or her breath and, perhaps, get a sketch down as well.

Othniel Charles Marsh, a Professor of Paleontology at Yale University, described and named an incomplete (and juvenile) skeleton of Apatosaurus ajax in 1877. Two years later, Marsh announced the discovery of a larger and more complete specimen at Como Bluff Wyoming â€” which, because of discrepancies including the size difference, Marsh incorrectly identified as belonging to an entirely new genus and species. He dubbed the new species Brontosaurus excelsus, meaning “thunder lizard”, from the Greek brontÄ“/Î²ÏÎ¿Î½Ï„Î· meaning ‘thunder’ and sauros/ÏƒÎ±Ï…ÏÎ¿Ï‚ meaning ‘lizard’, and from the Latin excelsus, “to exceed in number”, referring to the greater number of sacral vertebrae than in any other genus of sauropod known at the time.

Despite the much-publicized debut of the mounted skeleton, which cemented the name Brontosaurus in the public consciousness, Elmer Riggs had published a paper in the 1903 edition of Geological Series of the Field Columbian Museum which argued that Brontosaurus was not different enough from Apatosaurus to warrant its own genus, and created the combination Apatosaurus excelsus: ” …In view of these facts the two genera may be regarded as synonymous. As the term “Apatosaurus” has priority, “Brontosaurus” will be regarded as a synonym.”