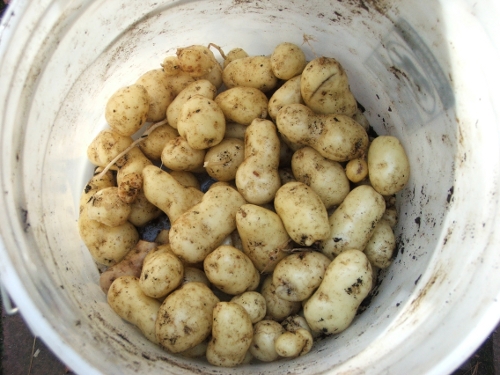 In the balmy 60F weather I dug up the last two potato towers. All in all there were three bins, 4’x4′ each and filled up to about 3′ high. In one I had put 2.5 lbs of Salem, in the other two 2.5 lbs of Bintjes each. I harvested 1 lb and 1.5 oz of (terribly tasting) Salems a few weeks back. Yes, that’s a negative yield. We might as well have eaten our $8 worth of organic seed potatoes. And today I dug up 6 lbs 10.2 oz of Bintjes (which were $7.5 for the 5 lbs of seed). At least I didn’t come out negative on the Bintjes! 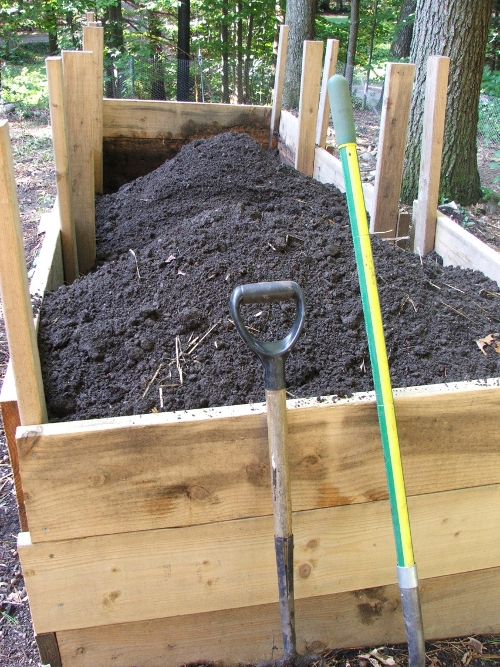 That was one labor intensive, costly (all purchased compost, and the wood for the towers) and utterly useless gardening exercise. I’m so glad I blog. I was thinking, as I was seeing the disappointment growing on my digging fork, that I could at least get a funny blog post out of it. Well… funny…

Some of the plants had some tiny potatoes in the upper 2 feet of the soil, but most spuds were formed in the bottom foot, and most of these were undersized. I am guessing that if I hadn’t slashed down the blighty plants a month ago, or if they hadn’t caught the blight in the first place, I would have had a little bit of a larger yield, but not large enough to make it worth our while anyway. The soil was also wet and very heavy. Perhaps the tubers couldn’t grow even if they wanted to: too much pressure, especially from above (those useless 2 feet of soil). Maybe we placed the planks too tightly together, so there wasn’t enough drainage. But in the end I think we just don’t have the sun in that location for the sugars to be transformed into starches.

Well, two of the bins will be a depot for compost for more beds next season – they held blighted plants, however, so not for solanaceae.Â  The third bin will become a large compost bin. I’ll cover them with straw and a tarp during winter.

So here is my final potato tally:

The Keuka Gold, which were great tasting, were the only success. Maybe I should stick to those next time? Maybe I shouldn’t grow potatoes at all next year?