Like I said in an earlier post, I would not recommend our present hoop house design to anyone who has gust of wind and lots of snow. It has served the purpose of getting us going, of experimentation, and we are still hoping for a Winter Harvest (I’ll be sure to harvest something before March 20). But the idea is to have a movable hoop house, and to move it on our last frost date (predicted by yours truly to be 1 May) to its Summer position. And before we move it, we want to redesign it.

We want it sturdier, more wind and snow-proof, more airtight, with more ventilation possibilities, and a sturdy tight door (or two). We’d like heavier, more durable and more transparent poly (this one looks good but it’s expensive).

To get all this, the new design will involve some wooden and metal parts (where at present the whole thing is pvc). And because we still want it to be movable in the sense of pick-up-able (so as to avoid soil and pest problems), we will have to make it modular. It will be made of pieces, fit together, that can be taken apart and moved and refitted by 2-4 people in the span of a couple of hours.

We are copying some ideas from this design (which is not movable).

So here is the first draft: 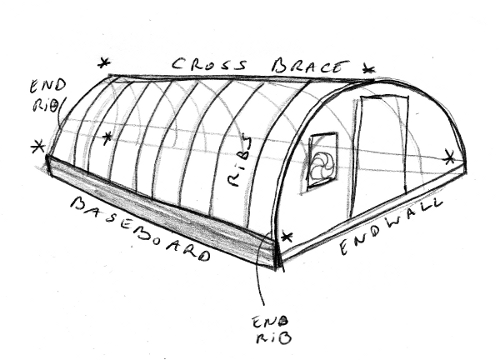 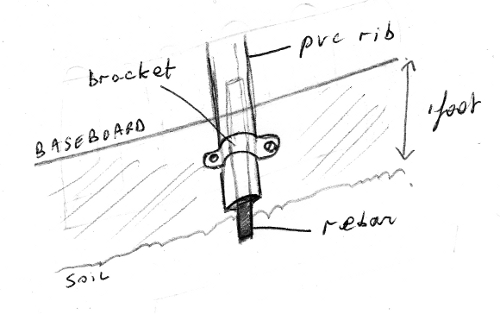 So you get the idea. When we move the house, we

We’ll be playing around with this. We also need to figure out how to make the 6 crucial structural attachments – (*) of baseboards to end walls and of top cross bar to end walls. A simply click system would be great, or some kind of bolting system. All removable screws and bolts need to be durable enough to stand up to repeated bolting and unbolting.

We still want this thing to be inexpensive, but we know that, with a better poly, the venting system, the wood and the hardware, we’ll be looking at something twice the price of what we have now. What we have now cost us about $200 – and we’ll reuse it as a shelter for our woodpiles.

Let me know what you think! 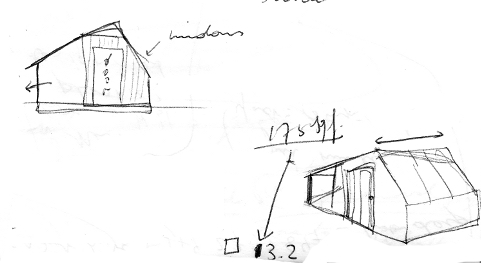