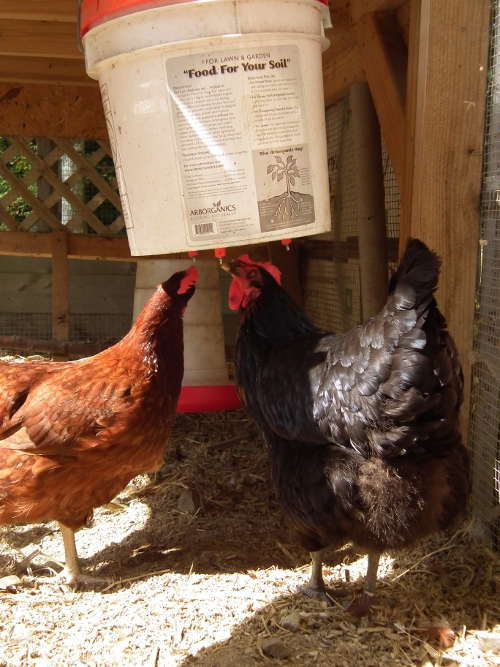 I can’t believe I never reported on this. About a month ago, on the recommendation of my chicken mentor Â and fellow-blogger atÂ This One Good Life, I ordered theÂ Avian Aqua MiserÂ from the good people atÂ the Walden Effect, Anna and Mark.Â I installed three valves onto a five gallon bucket and hung it in the coop.

It took the hens a while to get it. I stayed with them because it was very hot and I didn’t want them to get dehydrated. The red color did attract them, but they just staredÂ at it. Not one peck. I nudged the valves myself to make them drip but the ladies only drank from the dusty puddles in the soil. Finally I caught two of them and forced their beaks to the valves. Â Still nothing. What to do? I got some yogurt (their favorite food) and dabbed it onto the valves. They went for it! Once one of them got it, they all followed suit.

They’ve been happily sipping since then. I like theÂ tick-tickÂ sound when they do.

Remember that picture of Nocty-of-the-Whiskers that I took last week? I entered it into Anna and Mark’s new EZ Miser Waterer contestÂ and it won second prize! I chose the EZ Chicken Watered Kit. This new system will be great in the run, where I can set it on a tree stump (on the old system the nipples go on the bottom, so you have to hang the bucket, but in the run there’s nothing strong enough to hold it).

Soon we will “solarize” the coop, and one of the elements will be to heat the waterer(s) so in winter the water doesn’t freeze. More on that later!

Thank you, Ana and Mark!Â  You are an inspiration!

In the meantime, the newly introduced pullets Nocty and Oreo are looking on from the relative safety of the coop. I’m sure they’re hungry and thirsty, but they’ll just have to get their courage up and go down there. 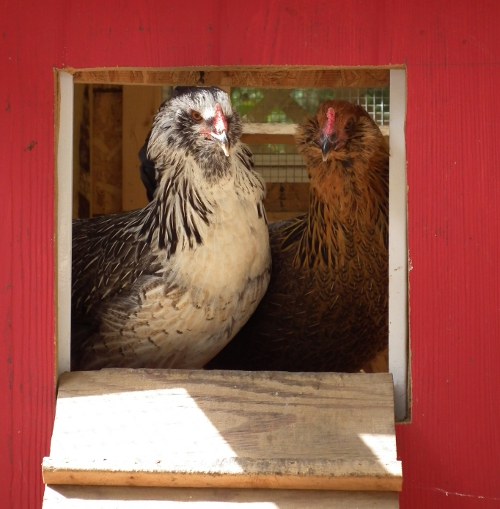